With this show in Hamilton at Copps Coliseum I felt it it kind of flew under the radar for me since I did not have a ticket yet and wasn’t 100% sure I was going. It seemed weird having The Who in Hamilton versus Toronto. I made the trip from Toronto a grabbed a single ticket in the 9th row. The fun begins…

I helped a family I had met online who was coming to the show get the $9 parking and then met up with them inside to chat about their trip from Rochester, NY. An obvious Who fan and mother of 2, she brought her 10 year old daughter and 15 year old son to witness one of the greatest Rock Bands on the planet do what they have been doing for 4 decades. Play Rock Anthems.

Once inside I hung out around the soundboard at the rear floor and looked closely as the lighting technicians set up. There it is… “the setlist” … camera out and I took a photo of it and then later another shot over a couple of shoulders… just in case I didn’t get the actual setlist in hand after the show. Here I crossed paths with another serious concertaholic who goes by the handle the original kid rock. We chatted for a few minutes and I took a shot of the pass on his jacket as he staggered away. 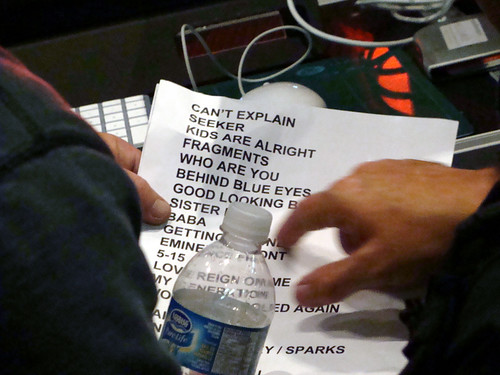 9:05pm. The Big Screen lights up and The Who take the stage and they take us for an immediate trip down memory lane with Can’t Explain. I loved hearing “Seeker” and watching Pete Townsend all bundled up in a trench coat and scarf as if he hadn’t quite warmed up yet. The first 5-7 rows down front were dancing and in the aisles no where near their seats… me included. That ended with security cleaning up and interupting my first video “Who Are You”.. which was ok because I got a little smile as I looked in front of me as the 10 & 15 year old along with their mother were being escorted back from being right down front instead of following rules back at their 17th row seats.. Way to go! 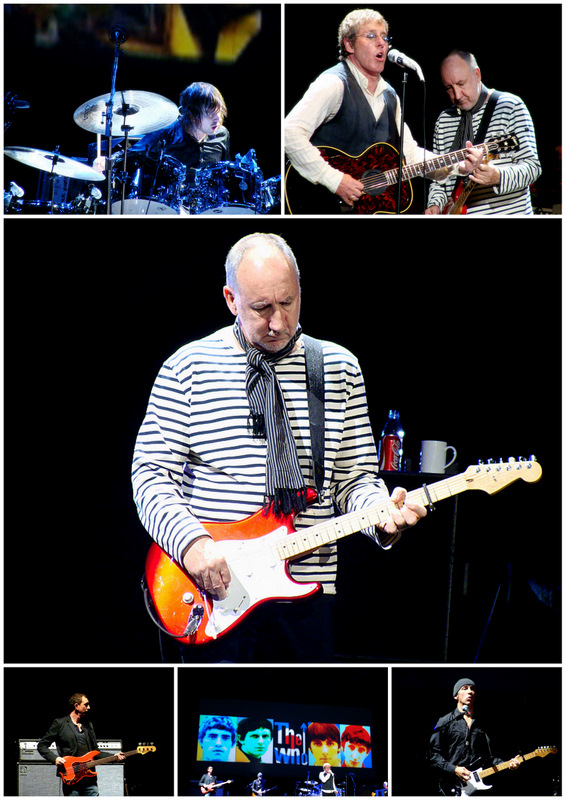 One of the unexpected highlights for me in this show was during the performance of “Real Good Looking Boy“. As much of a Who fan as I am… I just didn’t seem to recall this song… From Roger’s intro mentioning 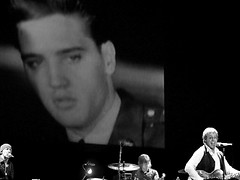 the obvious nod to Elvis to the powerful clips of The King himself on the screen as young man. The lyrics got me imagining a younger “WHO”… I saw Elvis and thought about his death, then glanced over at where The Ox… John Entwistle would be standing as Pino Paladino held down the right wing on bass… it was just one of those moments where you think you know a song and even if you do…it sounds like the first time for some reason. This song was just perfect. Right On! 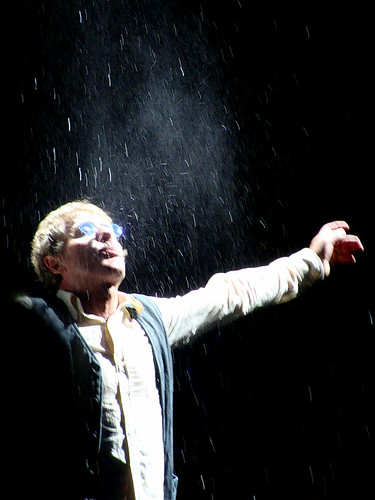 sing-a-long and harmonica of course from Roger. This was followed by Getting In Tune which I really enjoyed as it reminded of listening to Who’s Next over and over again back in the late 90’s when I discovered that Album over again through some friends. The Song Is Over was another favourite off that album. Here is the Getting In Tune video…

The band really leaned into 5:15 and the audience was responding in various ways from yelling lyrics, screams and one guy was throwing his chain-smoking girlfriend in the air for the entire back half of the show….plus the super fast video of the traintracks worked well. With Eminence Front next… these classic rock moments were making the string of songs..fly-by. It was so good to see this band again. Up close too! “My Generation” featured some fun bass from Pino and more and more of the excellent drumming we witnessed for the entire set by Zak Starkey. Then the finale of “Won’t Get Fooled Again” The energy level climbs up another notch on and off the stage for this one.

The Who | Baba O’Reilly | Teenage Wasteland | Hamilton | Copps Coliseum from concertaholics on Vimeo.

So the band comes back on stage for the encore and Roger & Pete start to talk about how quickly the band returns to the stage versus the rituals of the 60’s, 70’s etc. He said they had more things to do back then and Pete mentions possibly not having any equipment left to even play back then… Here is the conversation and …it leading into “Naked Eye”

Pinball Wizard was another singalong with more visuals on the screens but what happened next was worth the trip from Toronto and the ticket price for sure… according to a fan on the another forum we headed into a medley of Overature/Amazing Journey/Sparks/Underture/We’re Not Going to Take It…. and somewhere inside here it appeared Mr Townsend was going to put on a little clinic with is red axe…. so I zoomed in and started to film… for 6+ minutes..

There isn’t alot to say after watching that video… the party-lady beside me turns to me after experiencing this and musters up the best sentence she could to saying “you have to send me a copy of this”….. That is me yelling in the background at the guy beside say “unbelievable”… “deadly”… thanking the guitar gods for sending me to this show. This is Pete Townsend…this is The Who…. “See Me, Feel Me” and “Listening To You” was one big “love-in”… barely enough to slide down off that guitar solo.

At this point I actually left my row and headed back to the soundboard at the rear-floor area. So I watched Pete and Roger do the one song I knew was left on acoustic guitars… TEA and THEATRE. Beautiful.

I watched the lights come on. I watched the lighting tech’s sigh to each other on another show well done… I locked in on that setlist again… waiting as the tech shut down the 2 apples… he glanced over to his left… I was there… “Could I have one of those setlists“…as I pointed.. he looked at his partner for approval, he nodded, he handed it to me, I nodded back.

SEE ALL OF OUR WHO VIDEOS ON OUR YOUTUBE CHANNEL

SEE 60 OF OUR BEST PHOTOS TAKEN ON OUR FLICKR PAGE

If you look closely at this setlist and the one I got a photo of above ..they are different. The other one is actually Toronto and this one below that got handed to me I believe is Detroit with changes made. 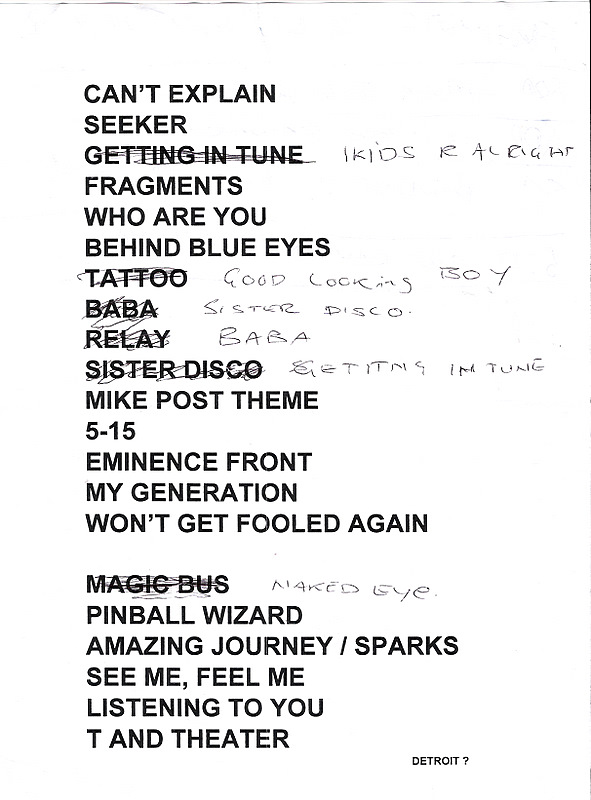 Where you at the show?

Posted in: The Who
Prev