Friday Nov. 7th presented the practicing concertaholic  2 big choices of either the sonic boom of AC/DC at the Rogers Centre with 44,999 other delirious fans or Daniel Lanois at a tiny obscure venue 1.5 hours south west of Toronto that seats about 300. It really wasn’t too hard a choice for me. I will take the opportunity to witness musical genius over a stadium blast anytime. (fortunately both bands are playing again very soon in Toronto and on different days)

The venue for Daniel Lanois had been moved at the last minute from the Old Roxy Theatre in Mount Forest Ontario to an even smaller, positively more obscure venue because of construction outside the Roxy. I guess the last minute change and possibly the steady downpour threw some people off because there were maybe only 150 people present in this hundred and something year old building. I had a nice 6th row seat anyway but I couldn’t help myself and moved up to the 3rd row centre when I realized the show about to begin and the entire row was still empty. 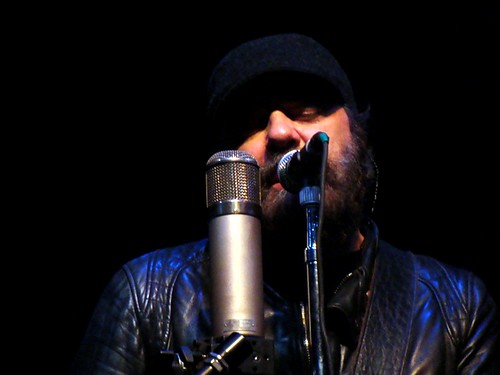 Lanois rolls right into The Messenger. He is wearing black leather jacket, black t shirt, black ball cap, his black hair all grown out and sporting a black bushy beard. The dark feel and look is contrasted sharply and amazing well by his 1956 Goldtop Gibson. The lighting is very subdued, everything is subdued and it fits. The theatre is small with the sloping floor, arched ceiling, small balcony and plush red velour seats that really help out the acoustics in these small older theatres. The acoustics are excellent. We are all at the sound board seat. The back drop is a small to medium sized screen that has the band projected on to it in black and white. It is continuous live shot as there is video camera guy moving about.

The music is so “take me away time” The Maker…. Still Water … Danny always a story teller talks a bit about the Grand River and his friends / compadres on the reserve while rolling out this tune.

He is playing with a nice tight band which he kindly intros. This is a pretty bare bones set up. He is using a couple of microphones and the main one looks like a vintage microphone.  He does some heavy tunes with the full band and does a really nice solo set. We get Jolie Louise, Rocky World, Under The Stormy Sky like Bang! Bang! Bang! All played in the solo set.  Highlights for me are probably the opening few songs, the solo set and the songs Fire and Slow Giving. Yes, basically the whole show.

I love the stories. Before he does a tune on his pedal steel he tells the crowd he has a soft spot for the country sound and continues sharing a story about street playing in Toronto near several different bars and mentions going into one watching a musician playing a pedal steel. He told the musician he wanted to learn how to play the pedal steel.  At another juncture he talks about riding his motorcycle through these dusty concession roads and the hidden beauty of these places. He mentioned the theatre in particular. I recall at another point him talking about the perfect egg. Fry the egg don’t cook the yok and place on a slice of bread with butter. He followed this by welcoming everyone to the Lanois cooking show. 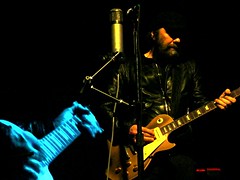 It really felt like there were only 11 people here.  He had a conversation with a couple he knew from the area from the stage that went on for a few minutes, it kind of talking back and forth and the crowd was so small neither him or the couple had to talk very loud to hear each other.

Luckily enough I hung around after the show to get a good look at the Gibson Goldtop and to see if I could score a setlist. Danny came out pretty much right away and was talking to a few people that were waiting for him.

There were maybe 7 of us at this point. I asked him if I could get a picture with him and if I could get the inner sleeve of my Acadie CD signed. He happily said no problem to both. Unfortunately the picture came out a little blurry but you can still make out who it is.

The only thing I really missed was some of the pushing, feedback laden, futuristic, cutting edge, stretching it out there, awesome sounding guitar work I caught doing a couple of years at The Great Hall on Queen St. Toronto and Hamilton Place Theatre. He just really kept that to a very bare minimum. Ah! I can only hope for Steamdog at Massey Hall this coming Friday Nov. 14th.

The entire set was kind of short but the combination of a tiny crowd, a great obscure venue and the magic of Daniel Lanois both musically and storytelling- wise, made this a very satisfying trip for a concertaholic like me. 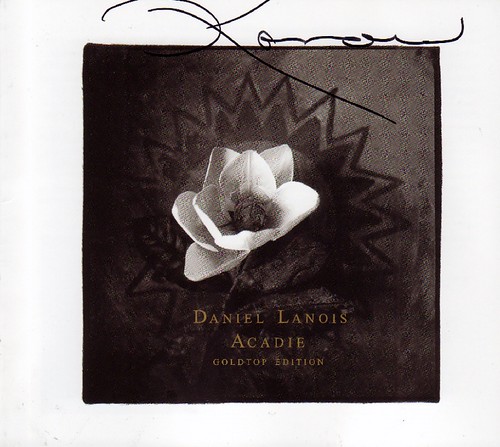 Daniel Lanois fans please leave us a Comment below.

The Who in Hamilton at Copps Coliseum