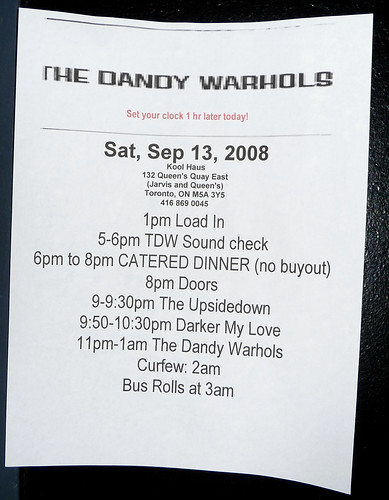 Milling around the Merchant Booth where the Darker My Love “45’s” were for sale (yes vinyl) Will Canzoneri…the band’s keyboardist told me the guys were a little haggard from the road, not a good sign as they haven’t been out that long.  Apparently they caught some bitchy weather on the drive in from Chicago. Will put in a good word in making sure one of Canada’s top music photographers Richard Beland could get on stage to capture the visual side of the set.

Like the last city Toronto seemed a little Darker today also with its humid rain spell to welcome the boys from California. It didn’t take long though for the band to settle in… get comfortable and introduce their new CD “2” to the crowd, young 20 something’s down front with the GenXers in the back half  and  allow them to get a feel of this relatively unknown (in Canada) 5 piece.

The mix was a bit muddy or was that the intention of sound? The venue is dark tonight as usual but this group has a light quality beneath a psych-rock sound gets your interest on fist listen. The drummer with his Bass man tucked in ever so tight to the left rocked stage left rhythms as the maraca shak’in Tim Presley served up leads over on the right side….

Highlights of the nine-song set were the trippy Northern Soul and the would-be radio hit Two Ways Out.  Following a well polished opening act (The Upsidedown)while the crowd waited patiently for the veteran Dandy Warhols Darker My Love started to win a few over as one them turned from her leaning position on the stage and asked “what was there name?”

…and then seemed interested as guitar player Jared Everett handed me a setlist that seemed to have been written on lined paper from their road binder?

We would like to run into these guys in Toronto again sometime with more songs, same sound and brighter lights so we can see the Rock too!