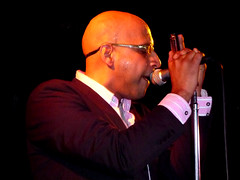 You have to know something special is going to happen when you find out the 3 or 4 of people beside you have flown some 2000KM to watch a band from their hometown of Winnipeg, play 2 of what may turn out to maybe 6 reunion shows.

The last time I saw the Watchmen they were opening for the Tragically Hip on their Phantom Power Tour in 1998 at The Landmark Theatre in Syracuse NY. I guess I caught The Watchmen 3 or 4 times on that tour and really enjoyed them, so when I heard they were reuniting for a couple of shows at The Legendary Horseshoe Tavern I knew I was going catch at least 1 of the shows. As it turned out I caught the 2nd night and man I am glad I did. 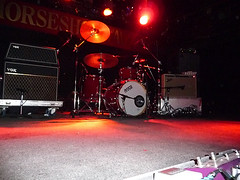 When you do the Horseshoe or catch a band that may or ever play again you have no choice but to get up close and really get the show into you. The Horseshoe has a nice low stage. The stage only comes up a meter or so maybe a bit higher. When you are up front leaning on it or against it you really know why this venue hasn’t changed much in 60 years, it didn’t have too!

We run into is 1 of 2 guys holding HD cameras who are recording the show(s) for a documentary on the band.

We ask some questions and learn the working title is All Uncovered (name of a great Watchmen tune), they have complete uncensored access to the band, access to the soundboard and mention the DVD should be ready for mass consumption by March 2009. I can’t help but think it will be a great piece of rock & roll Canadiana.

I have seen a few 1-off reunion shows (not to be confused with a full blown reunion tour) and it always seems like the band and crowd are having such an obviously great time that the mood / vibe quickly becomes so infectious the crowd just goes over the top. Another reunion show that comes to mind is the Junkhouse reunion show in a few years back at Club 279!

I am writing this as an addendum to a more in depth review done by a fan that attended both shows. I will send out a few highlights from my point of view….then let the hardcore fan ramble on.

I noticed right off the hop that Danny wasn’t carrying his silver lunchbox out on stage as he used to do in the past. I never really figured out what the reason was behind carrying the lunchbox. Hopefully the documentary will shed some light on this.

Starting out with Boneyard Tree is a masterstroke. It is like they haven’t missed a beat! The sound is strong and vocals are perfect. All the songs are here & the sound is just so good!! All Uncovered, Wiser, Stereo, On My Way ……all of them. 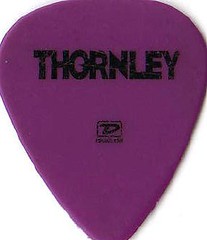 It all came together so well!! It all worked, the venue, the giddy- happy crowd, being right up front listening to stage monitors like they were in my own house, the bands happy vibe, the chick that jumped up on stage and had Danny ask laughingly “what’s next?”, the obvious awe of the band listening to lyrics being sang back they haven’t heard done for awhile.

All in all this show was a total blast from start to finish!!

I scored a guitar pic and as it turned out it was an Ian Thornley pic. That is another story in itself.

These were the two most self-anticipated concerts I have ever been to. It has been since New Years Eve of 2004 since I had seen the Watchmen play their “final” show in Buffalo. They had played a couple shows the week prior to the Horseshoe shows so they had a little practice to get the rust off.

The first night at the Horseshoe I stood right of center. I was more concerned about the view than the sound. There were a few familiar faces in the crowd that I hadn’t seen in years. Danny, Ken & Ian Thornley were walking around through the bar. Ken was selling a couple old Audio Playground T-shirts(which I already 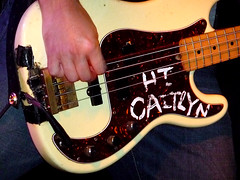 had), along with his solo cd “Lost In Awe” and a Ken Tizzard T-shirt. The opening act was Chris Koster. I didn’t care for much for it.
Finally the Watchmen took the stage around 11:30pm. The went right in to “Boneyard Tree”. It rocked. It was like they never took a 4 year break. After the song, Danny told us to get ready for 2 hours of classic Watchmen tunes. They went into “Say Something” followed by “The Wiser”. It was crazy to see Sammy behind the drums again. They played a set similar to their “farewell tour of December ’03. “Anything But That”, “Mister” , “Run & Hide”, “Soul Stealer” were classic songs off McLaren Furnace Room. Alot of In The Trees was played!
Everyone looking forward to a little Police medley during “Lusitana” wasn’t disappointed. I would have loved for that jam to go on at least another ten minutes. They played a reinvented version of “Holiday” which, by night two, we were looking forward to, because the new version rocked so much. I was looking for the keys (as Danny often refers to the keyboard) but I didn’t see them. I was starting to worry that I wasn’t going to hear “Brighter Hell”. Wait..They started to play a familiar riff…”Brighter Hell” without the keyboards! It was great. I think it didn’t lose too much without the keyboards, aside from the little opening intro of Daniel jamming out.

The highlight of the night for me was when they busted out with “34 Dead St.”. I just stood there unable to believe it was actually being played right in front of me. My favorite Watchmen song I’ve never seen them play and I was finally seeing it eleven years after I’ve started going to their shows.

Danny launched into his trademark Capella song of the night and it was “Heart Of Saturday Night”. An extra long version which was cool with everyone there. After “Incarnate”, the set wound down with radio hits “Absolutely Anytime” and “Stereo”.
They took a little break and, of course, came out for the encore. I believe the encore was “I’m Still Gone” and “All Uncovered”. A second encore of “Soft Parade” was a real treat for everyone there. Its perfect the way Joey and Danny do that song. By this time, Danny was definately taking a taxi home. But he didn’t miss a note. It was fvcking perfect.
.
One thing I noticed was that there has been a real upgrade in technology since 2003. Everyone there had a digital camera and was recording everything. Sh!t, where was that invention 5 years ago! I expect to see a lot of footage on youtube! Just as everyone thought the set was over, they came out and did “Middle East” and “Rooster” back to back. Three encores! The place was going nuts. As promised they played for two hours. 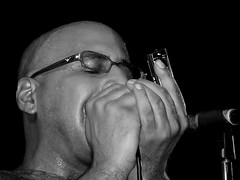 The second night we wanted to get there early so we could get up front. There was a line early and the crowd was definitely hotter this night. It filled up fast. We got to meet Jeff & Todd from concertaholics.com. Great times Jeff! The opener was a band called “The Waking Eyes“. They weren’t bad and were 1000 times better than the opener the night before.

As the Watchmen were about to take the stage I sneaked a peek at the setlist and spoiled it. I had to so I could video 34 Dead St! We were left front center, right in front of Joey. I could tell instantly the sound was going to be better than the previous night. They ripped through “Boneyard Tree” and “Say Something” same as the first night. It was very surreal knowing that this could be the last time I get to see these guys play together. 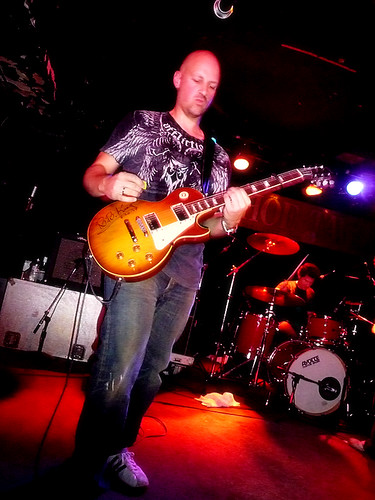 I enjoyed every minute of every song they were playing. “The Wiser” has always been such a great song and has always gotten radio play on 97.7 HTZ FM. Danny jammed out on the harp. Joey was perfect. Watching him from only a couple feet away was incredible. He was so into every song. The interaction was great. Joey & Sammy would look over at each other and you could tell that they were as into the songs as we were. You knew everyone there was having a great time.
.
.
That newly revamped version of “Holiday” met every expectation we had. I want a copy of that! They launched into “Mister” which is as big a hit with the hardcore fans as anything. By this time, having looked at the setlist earlier, I had my camera ready to go. I knew the surprise that everyone behind me was about to hear. The best version I’ve ever heard of “On My Way” was the highlight of the night, weekend, and trip. Danny dedicated the song to Paul Newman, who had passed away earlier in the day. What a great performance of that song!
.
.
They kept rocking with “Calm”, “Soul Stealer” (which was just awesome) and “In My Mind”. I was whipping out the camera again for “34 Dead St.“, which Joey later told me is “a hard song to play”. Coming from him, that means I would not even attempt to learn it. “34 Dead St.” had everyone screaming the words. I was surprised to hear everyone singing along with a song that hasn’t gotten played in concert since 1996. You could tell that these were real fans.
They played “Absolutely Anytime” and “All Uncovered”, which always gets people trying to out-sing Danny. He was happy to let the crowd fill in as usual. For the second straight night, we were treated to “Heart Of Saturday Night”.

Daniel’s voice is still so recognizable. As usual, “Incarnate” followed the Danny solo. The problem was…well..some drunkard decided to jump up on stage and dance along side Danny and Ken for most of the song before the band could help her off. She didn’t even have the decency to show her morracas. “Stereo” closed out an amazing set of music.The guys came back right away to do “Soft Parade”, “Anything But That” and “Brighter Hell”. People have their favorite songs but they were singing very loudly for “Brighter Hell”.
..
Another encore and the place was loving it! They played “Run & Hide” and it was even better this night. Watching Joey just maneuver those strings, inches away from your face. He never messed up. Joey just made my weekend. And just when you think it cant get any better, Sammy starts playing the bongo intro to “Middle East” Danny explained that this was one of his favorite songs to play live. The build in to that song is so powerful. Its very melodic right until the point where Danny starts on the harmonica. They nailed it, just as they had every song that night.
.

One more song. A guy in the front row was wearing the t-shirt that said what he wanted to hear. “I’m Still Gone” . It was a great way to close out two great nights and the best show I’ve personally ever seen of any band.

As a long-time hardcore Watchmen fan, it was everything I could have asked for and more. I miss the band and if I had the money, I’d go see them in Winnipeg on October 30th. Watchmen fans are very passionate about this band and if this show is any indication, they were made to play as a band…as the Watchmen.

Posted in: The Watchmen
Prev