I left Toronto just after lunch and was lucky enough to catch a ride to Kingston, Ontario with a couple I had never met before Wesley and Suzanne. With a solo ticket

for this one , I knew I would run into a handful of other Hip Fans I have met through The Hipbase or various other Hip Tours over the 17 years I have followed this Canadian Music Hall of Fame Band. This rock couple were heading to the show in a convoy with another 1-2 vehicles all heading for an overnight roadtrip to see The Hip open up the all new K-Rock Arena. It was great to hear them talk about taking their kids on a family Trip down to the Rock Hall of Fame, Sun Studios and Graceland. Those are all on my list as my kids get a bit older. After sharing some stories and some truck stop food we arrived in Kingston just after 4pm. They checked in to their hotel and I headed over towards the Arena to see if I could get in a little early and see the Band’s sound check. 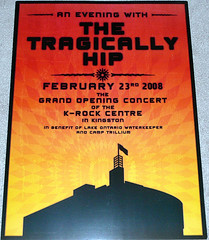 Now the merchandise booths were being set up and for sale was an event T-Shirt and a Limited Edition Poster. They were selling for $10 each and other than the “limited” part were not overly impressive compared to previous efforts…. but a poster most hip-heads would buy given this was the inaugural live show for this new hockey Barn. Time went by and almost a half hour late the doors finally opened and people poured into the arena. As the hallways got busy I headed down to the floor to say a “hello” to some fellow concert goers who I knew would be close to the stage. Nothing like a little Neil Young on the PA to warm the crowd up 🙂

Now the Lights go down… and onto the Stage walks Dan Aykroyd….

With that introduction and the guitar-cry from “the lonely end of the rink”… and that image of Gord Downie jumping into air like a fish out of water… I was in my comfort zone… about 8 rows back on the right side… I took in the crowd, Bobby’s guitar playing and more than usual I zeroed in on Johnny Fay. His drumming was solid as Gord Sinclair blended his bass into each song and leading off the famous “Grace Too”…. Gord Downie was in a very good mood and covered alot of real estate up on the open stage where he would spend time on each side.. … selling everyone the Hip Buffet of songs… one by one… Some stand outs for me from the “rocker” dept would be Fully Completely… where Gord D started off by saying.. .. “Do you want FULLY?… Do you want Completely?”… the intensity in this one is just awesome… a power house tune from everyone in the Band.
As for the slower tempo offerings I really liked Pigeon Camera as Gord almost seemed to act it out.. Then…a few songs later Gord D. delivered an emotional Fiddlers Green.

Gord seems to say something at the beginning and then looks “moved” as he finishes off the song…..Then came “that moment” ….”38 years Old” caught me off guard… could have been the slide guitar coming from Bobby or just the lyrics and the overall song…I really enjoyed this one. “50 Mission Cap was another strong one for any hockey arena…… Another thumbs up at this show were the 2 large screens showing off 3-4 camera angles that really allow the concert goer from any position to get a close-up of each musician and their facial expressions while showing off their craft. It would be nice to ses this more often. I snapped a few photos of the screens and even used them briefly in a couple of my videos I shot at the show.”Locked In The Trunk Of A Car” was a nice way to start the encore set. Dan Aykroyd joins in on this one with some harmonica.

The concert ran over 2 hours and ended with a double encore. Gord D.. handed out many white hankies, broke his microphone stand in half and gave those pieces away, along with even throwing the cable to his mic into the audience at one point. You can see some of my photos display this behaviour on the screen and I was even able to get a quick-pic of 2 girls walking by who ended up getting one of Gord Downies handkerchiefs … 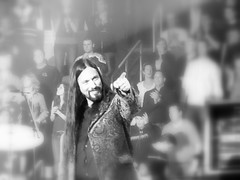 The roadtrip, the show and coming home with an access pass, event t-shirt and a couple of posters was all starting to come together nicely… sure I was going to get home late… but well worth it… and in the final moments my buddy Greg landed a couple of “setlists” and I received one to round out my night. Here is a photo of Bobby saying good night…..and after the show what song came on the house-system……”Happy” by The Stones. The rest of my photos can be found here or a slideshow here. The show was in support also of some of The Hip’s favourite charities The WaterKeepers and Camp Trillium. Please check them out. Also if you were at the show please leave us a comment. 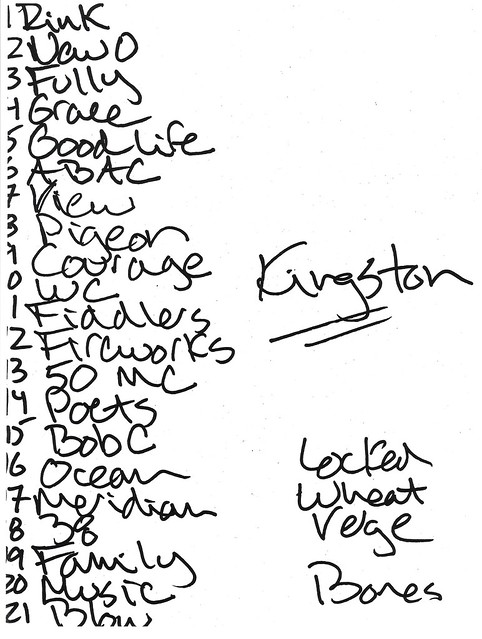 Posted in: The Tragically Hip
Prev