“possibly the best audience in North America for the Magic tour — including Boston shows,” from backstreets.com

I actually had a ticket to see Elton John in Kitchener this day. I unloaded my single on Craigslist hours before the show and opted out of the 29 song evening of piano and bolted to Hamilton to join Todd and some other friends in the VIP area of general admission on the floor for Bruce Springsteen. Wow what a decision that turned out to be…. I’ll let Todd tell his story ” … Jeff

Come on Up for the Rising…

Man last night we were there! Hamilton, Ontario was on fire and brother Bruce Springsteen was not only in the house he owned the place!

We arrived early somewhere around 2PM to get a wristband for the pit lottery. Our thought process was that I would get 1 in the first few hundred and my friend would get their wrist band somewhere in the next few hundred. So hopefully 1 of us would be getting in for sure. You know sacrifice your buddy for the cause! By the time 5:15PM rolled around there were just over 700 bands handed out and with the number now allowed in the pit directly in front of the stage being 400 our odds were very good. Bang! The number 226 was drawn and we both get in. The there wasn’t a single iota of organization as far lining up in order of the numbers on the wristbands. Security just gave up and allowed anyone with a white wristband and a teal coloured happy face covered pit wristband in.

Getting in with the first flush of the very happy paid off as we ended 3 bodies back from the rail just left of center. I am always amazed at how nice other true music lovers really are when waiting for a show to start. We met some really great people in our immediate area. Meeting others and sharing stories of other shows is always a nice part of the entire experience of concert going.

I luckily bumped into with a guy who has a very musical past and has great gear knowledge. We stood talking about the amps on stage and admired the guitars being used during the show. I got a lesson on guitar pick-ups and fender twin amps!! (Thanks Mike w/ Little Shop of Guitars and his wife Jen).

The lights go down! Forget about the sore legs from standing most of the last 10 hours. In the dark the band takes the stage and finally coming toward the front of the stage in the dark, the unmistakable profile and swagger of The Boss. To say the show started just doesn’t cut it, this was more like a launching…No Surrender… Watch it live in this video here.

Forget retreating anywhere we are just getting started. Without a moment between them Radio Nowhere follows Surrender and you know what there could of been a 1,000 guitars up there and the roaring crowd would have been louder still. A gorgeous Lonesome Day followed by Gypsy Biker finished out the first 4 tunes before Bruce took a breath and moment to say “hello Hamilton”.
…I don’t think there was a song the crowd didn’t sing along with. Loudly!! Here comes some more Magic. Bruce is trying to take it down a notch (shushing) he does manage to bring us down, just a little before leading into a high point for me and there were many, the souped up version of Nebraska’s Reason to Believe. Tough to explain but the live version is nice.

Watching Bruce feeding off the energy of the crowd and the looks passed around between band members just told you how special this evening is.Livin’ in the Future, Waiting on a Sunny day … the place is loud at this point, the singing, Bruce is being drowned out and he steps away from the microphone with a huge grin, looks around and gestures like “come on give it to me”. We start to get to a place where Bruce has to actually shush some more and motion with his hands to quiet the crowd down, so he can gently lead into a couple more…. Darkness on the Edge of Town, The River – what an awesome performance here especially the last haunting ethereal minute of his A cappella vocal performance and then Devils Arcade…come on!! For a mellow portion of a show (if you can say that) it was just outstanding. You know I saw this tour in Toronto in October 2007 and I have to tell you this set just flowed so much better and the crowd was 10 times more into it. 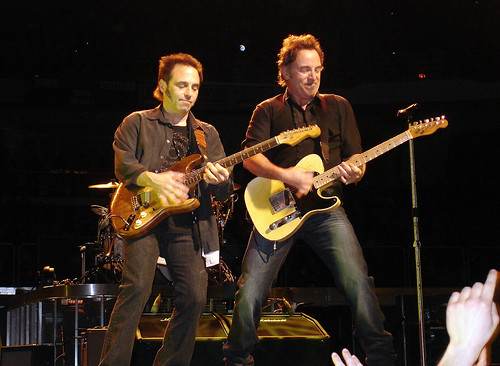 ……I think it was somewhere around here just before the Rising Bruce tells the audience that Patty says “hello” and says ” we have 3 teenagers at home and someone has to be there so they don’t burn down the house” He also mentioned Danny is doing well and hopes to be back before the tour ends then welcomes Charlie.La, La, La…La,La, La …. The Rising…so nice. Apostle Bruce is in the house and the faithful are listening!!I look at the Big Man and sometimes I think yeah… he should sit down for a bit he deserves it. That chair he has, if you want to call it a chair it is more like a throne… he looks tired every now and again but man can he still blow….

The musicianship is just so awesome to watch. Nils, Little Steven, Bruce throwing the leads around like Frisbees. Max hammering the skins, bass so tight you almost forget there is one, keyboards all over the place. Watching the body language the looks passed around the nods from this vantage point is just incredible.The audience would just not let the song Badlands end. They were singing so loud that when the band put down the instruments to obviously end the first part of the show…. Bruce through his guitar around his back once then twice turned gave the band the nod and they all picked up again and blasted out another 2- minute finish. ” the price you gotta pay”

The band is off and back in minutes kicking into the first of a 6-song encore…yep! 6 songs. I think Bruce does some band intros here then mentions how attractive the Ontario girls are before launching into Girls in their Summer Clothes which starts the encore off gently before leading into a heavy, heavy…. Thunder Road

…..Now it is our turn to touch the famous ash Fender telly.The 10-minute live version of Kitty’s Back was such a gem. This bluesy, jazzy, rocky tune is so awesome live. Bruce was way down on the fret board and just bending the strings ripping out the lead. I have to say I have always appreciated Bruce guitar skills but this tune raised the appreciation to a whole other level. There were a few minutes during the song where Clarence was casually resting on the edge of the drum kit riser wailing away. The keyboards were so, so nice! The whole picture here was pure classic. 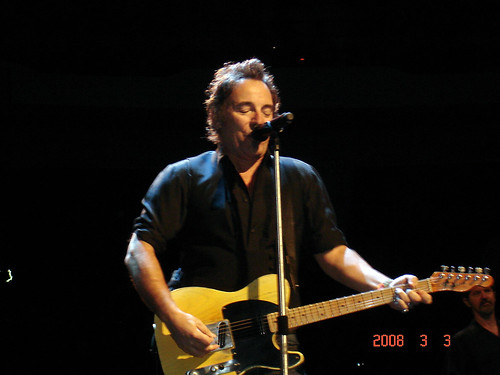 Born To Run…need I say more…Dancing in The Dark… no darkness here all the house lights are up and we are SINGING…… LOUDLY.The show finishes off with American Land an anthem to the free….makes me want to drive to Rochester…then maybe Buffalo …. and then…Todd

Setlist:
No Surrender
Radio Nowhere
Lonesome Day
Gypsy Biker
Magic
Reason to Believe
Because the Night
She’s the One
Livin’ in the Future
The Promised Land
Waitin’ on a Sunny Day
Darkness on the Edge of Town
The River
Devil’s Arcade
The Rising
Last to Die
Long Walk Home
Badlands
* * *
Girls in Their Summer Clothes
Thunder Road
Kitty’s Back
Born to Run
Dancing in the Dark
American Land 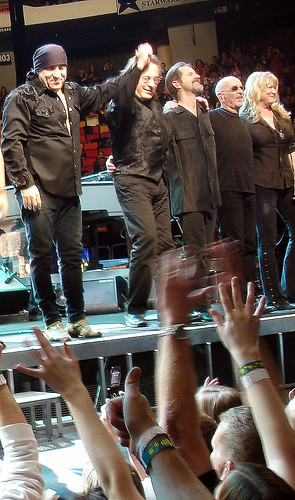 The Doors 1st Album by Classic Albums Live in Toronto 2008