I saw Tom Morello back in the late 90’s with Rage Against The Machine here in Toronto at the Phoenix Concert Theatre. The songs I knew… the guitrist I didn’t. I was blown away by a style I hadn’t seen or heard beofre in a live setting. Over a Decade later Tom’s new project Street Sweeper Social Club kicked off a great night of alt-funk-rock by hammering the “concert gas peddle” hard.

With Boots Riley on the Mic this band blasted through a 30 minute set that offered some “Rage” flavoured beats and guitar work that of course blew away 1st timers and basically had me nodding at buying the new CD when it arrives on June 16. Here’s a taste…

After my first NIN concert last fall ..I had seen one of the best light shows I had seen in years along with some great music. It wasn’t a Top 10 for me or anything & I didn’t know alot about the band…but the show was well worth seeing. Tonight’s show was different. Not as many lights and no 25 minute selections off  the slower instrumental “Ghosts”.  Trent Rezner @trent_reznor took the wheel from SSSC and unloaded the Nitric Oxide…. heavy 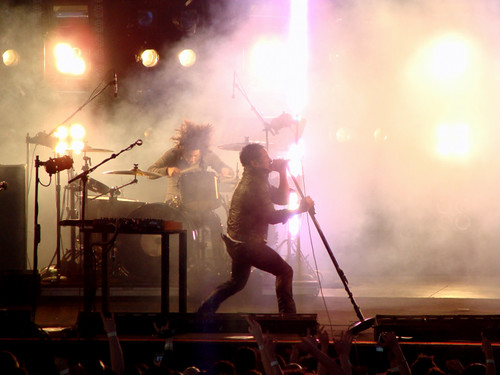 From the opener “Terrible Lie” till the “get your lighter out” closer “Hurt” These guys played harder then last fall’s ACC show in Toronto. Was it the Morello & Navarro sandwhich? Back in the 300’s behind the soundboard every song sounded bang on. The place was full to 16,000+… and full of NIN fanatics dancing, moshing and loving this show. The intensity of this band is so likeable… you don’t need to know the music… just step inside the NIN-Rock-Chamber. As I glanced around I spotted Richard Beland shooting for Chart… and as he flexed his professional lense I clicked on my trusty Sony while NIN delivered a nice version of David Bowie’s  “I’m Afraid Of Americans”

By the time “Head Like a Hole” started to wrap itself around us all for the squeeze it seemed as though we were watching the headliners…. maybe we were? This was feeling like a Festival almost knowing there was another wicked band still to take the stage. When the music gets this loud and this good…. the only thing that gets better is when you get the “text message” saying to come down front after the NIN set from our favourite NIN soundmaster. So we get “Hurt” for an encore with lotsa lighters and then go for a walk on the intermission. I overhear some people saying some concert goers are leaving now as they only came for NIN.  We headed down front to stage left and saw Richard again and eventually got some passes in hand… 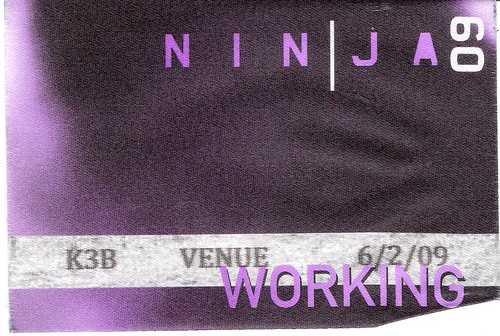 Even the above pass didn’t get us in the PIT but we managed to sneak into the 3rd row just as Janes Addiction took the stage. Right out of the gate that familiar vocal from Perry along with his Bowie-esque outfit and moves… it just drew me in… the presence of  Dave Navarro on the axe and a drummer & bassist that caught my attention right away. 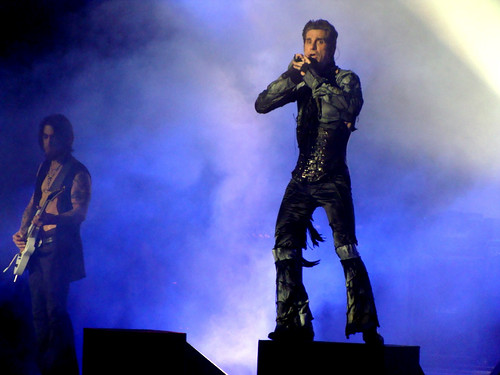 Navarro and Perry seemed to do their own little shows within the show… as did the drummer who assaulted his intrument…song after song….  the groove was good and it was obvious these guys were connected heavy. By mid set the vocals got even better and the Bass player seemed to shine at times even over the two flamboyant frontmen. 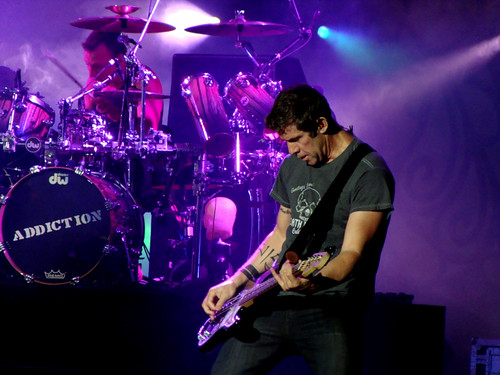 As we were walking out of the Molson Amphitheatre I heard one fan say to another that “the” moment for him was during “Summertime Rolls” I didn’t know the song…but chose to video it and noticed it getting response from fans who obviously know Janes Addiction. If you look closely behind Navarro while he solos…you can see a couple of his friends grooving to the show.

This show was solid all the way around. A Total ride back to time where I had crawled out of highschool and was trying to figure things out…as was the music scene then. Now as we get “STOP” The band totally ERUPTS…. everyone seems to be on 12 Red Bull and part of Farrell’s costume is off exposing the Corset and his wirey frame as he gyrates on the monitor…holding the Mic out for us to participate!  We Did….

He talks about how nice Toronto the city is, dreadlocks and more and they leave… only to come back with the anticipated Jane Says