This was the first show I have ever gone to at a casino. The vibe is certainly not conducive to a rock show. I guess it may not be fair to judge this by a single show, however, this one certainly felt like something was missing. Don’t get me wrong there were great moments like Stephen Stills doing Bluebird and stuff like Southern Cross, but there is an all business “feel” to the whole process around the show. Heavy casino security, not being able to have a drink inside the venue except for water, in quick out quick, the length of show and even the fact of the band (Graham Nash) acknowledging the “captive” audience.

At any rate as I said there were highlights and the big ones for me came from Stephen Stills.  The guy can still play a mean guitar and harmonize with the best of them. In fact he is one of the best ones! 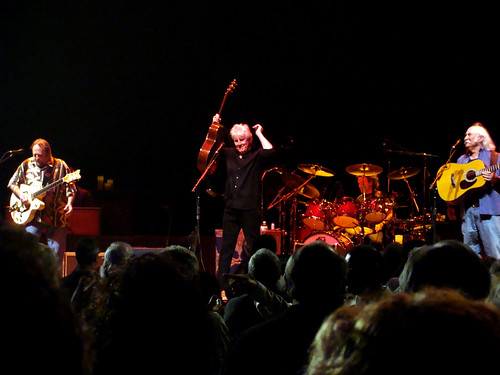 The show started with Helplessly Hoping and You Don’t Have to Cry. I felt these were mellow enough to let the band warm up the vocals and ease into the show. Graham Nash said “we would like to play some songs from friends of ours” and the band went into The Stones Ruby Tuesday. This came off very nicely and at the conclusion because the crowd reaction was so “blah” Nash came back to microphone and said “that was from The Rolling Stones” < I assume to generate some reaction, and Stills pipes in with, “because, they need the money”.  At least this got the crowd laughing a little.

It wasn’t until Guinevere that I really began to hear David Crosby clearly. I am not sure if he was just really warming until this point or what, but his magic kicked about here. They rolled through Marrakesh Express and did a really nice version of Uncle John’s Band that was rolled out with Graham mentioning Jerry Garcia as a friend. It really started to feel like a serious rock show when they played Long Time Gone. I mean this was awesome, a definite highlight!! If I closed my eyes it could have been Buffalo Springfield playing during Bluebird. In fact I did and it was!! Southern Cross was another Stills gem. The tempo felt a little rushed but the extended finish on this was so, so good!  I have to mention at some before Southern Cross someone in the audience yelled out “Southern Cross” Crosby walked to the microphone and said, ” do you really think we would do a set without playing Southern Cross” then he motioned like are you nuts with his doing counter clock-wise circles around the sides of his head. This was another odd moment. Wooden Ships what can you say? Pull out the first CSN album put it on and you are gonna know “exactly” what I am saying. 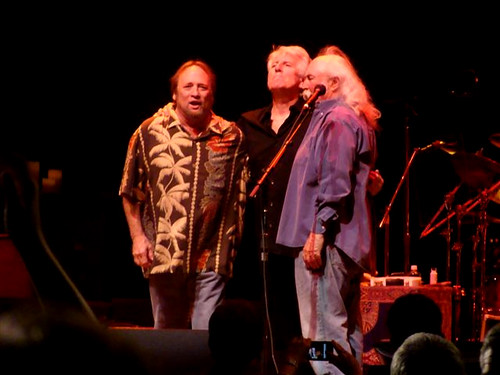 I go to shows to be taken away somewhere that music can only take me and this got me there!! I scored a setlist from the sound board guys who were more than kind of friendly as we spoke abut their journey with these amazing musicians. The list reads For What it’s Worth but that was changed during the show to Our House, which of course was the sing along song. They finished off with Teach Your Children which went over nicely. The entire show ran less than 90 minutes. The security was all over my camera so I only managed a couple of shots, so forget about video. As I said there were highlights but the entire “casino” vibe has me rethinking a couple of other shows I have tickets for at Casino Rama this summer. Then again row 2 for LIVE can’t be that bad! 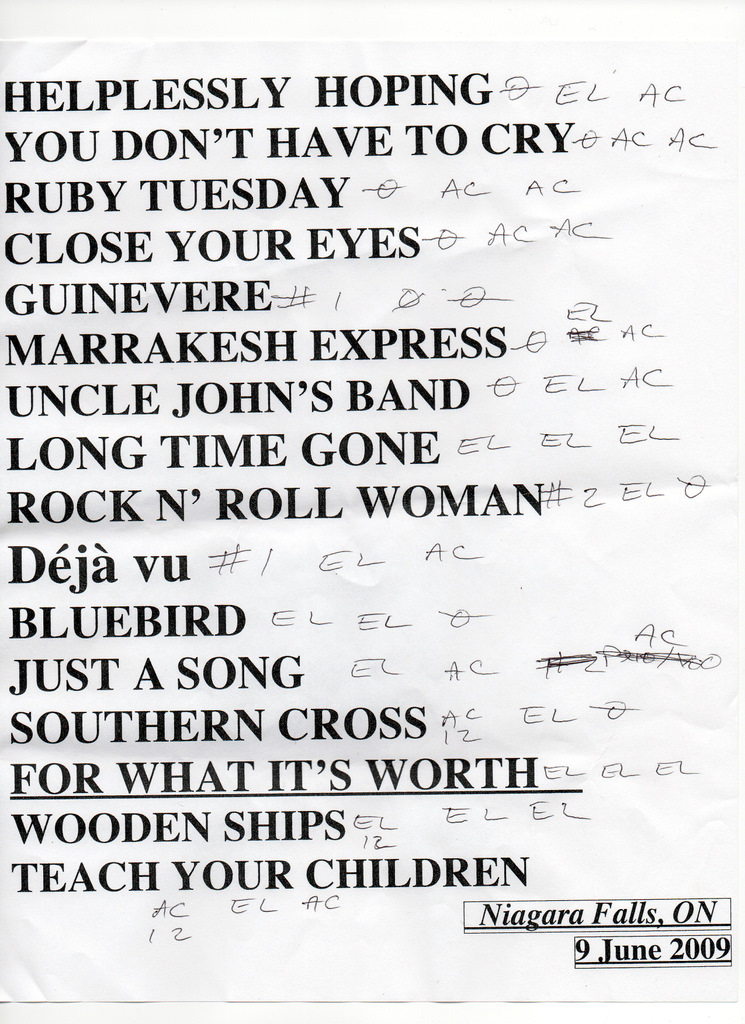