We arrived and headed into the Moslon Amphitheatre earlier than usual around 7:30pm or so and it still wasn’t early enough to see all of Joe Cocker’s set. We missed songs like “When The Night Comes”, “One” by U2 and “You Are So Beautiful” to name a few. No tickets were sold for the Lawn at all so the crowd was tight a grooving away in their seats to Joe Cocker and his band. 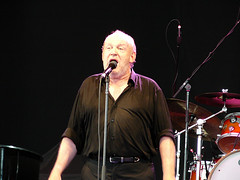 5th Row centre lends us a nice view of the stage and as I glance around to meet our family for the evening it seems it’s Mr King Can and Mike S. Hard Lemonade. This appeared to be the 45-55 crowd who hadn’t been out in a few years or that they had started the cottage party early… now as “You Can Leave Your Hat On” drifts down off the stage into our laps… people dance and look amazed at how well Mr Cocker is carrying out his set. The history of this music was hitting everyone and when A Little Help From My Friends launched it’s epic intro guitar riff… you couldn’t help feel that energy usually reserved for the “main act” – check out a couple of minutes of it here….

Joe Cocker | A Little Help From My Friends | Toronto 2008 from concertaholics on Vimeo.

The intermission proved to be entertaining itself. Dozens of people bounced around all talking to each other from row 2 all the way back to row 8 or 10. I mean the crew around us from Stoufville, Ontario were there to have a good time and there seemed to be so many I felt like we snuck into a private party and knew no one. It didn’t matter. Someones grade 7 teacher showed up and walked past us 8-10 times and a previous Toronto TV Talk Show host sat beside my wife providing some interesting behaviour from people wanting to say hello in the weirdest of ways. 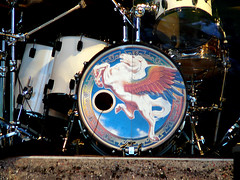 Steve Miller Band walked out on stage and right into Swingtown. He looked like “Here comes Wrangler”… a rodeo dude or something.. not a run-down-rocker out on his pension tour. It took a little adjusting for me coming off a Black Crowes experience only days before. This show had a casino type feel… a couple of more songs in and the band goes into Abracadabra… that song many part-time listeners didn’t know Steve Miller did.

Huge 80’s hit but not a real favourite of mine but boy did I dive into the next one… The Stake… this one rocked and provided the first glimpse of some nice guitar from Team Miller…..beautiful guitar from Miller himself and then that hypnotic line “nobody loves you like the way I do” …. I would have taken in a 9 minute version of this easy… but it ended ….and up next…  The washroom-beer-break set. 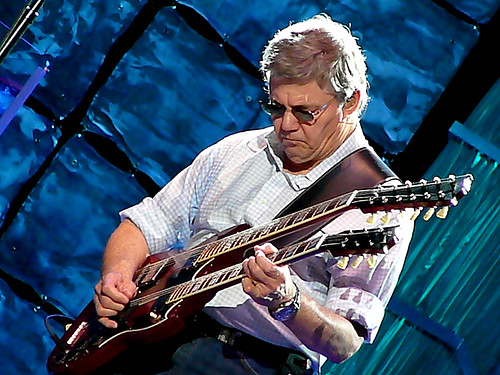 Next Steve Miller delivered a 5 minute pitch on why vocalist Sonny Charles was going to sing a few songs for us. He can still sing and the band played well…this just wasn’t what the majority of the crowd wanted. They wanted to put another log on the rock and roll bonfire and sing along to  7-10 more hits from Steve Miller himself. Heck I was kind of even in that mood myself after having some beer spilt on me, seeing the grade 7 teacher again and of course seeing the Original Kid Rock sitting in front of us taking pictures of the audience. So I ran up and snapped one of him that he posed for. This guy has been to what I would think to be in the thousands of concerts and had his photo taken with everyone. 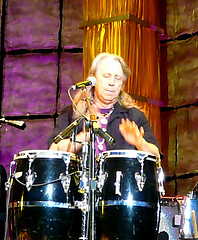 5-6 songs later FLy Like An EAGLE comes out and this long version features many in the band showcasing their talents including the original Norton Buffalo who has played with Steve Miller since 1976 along with tons of other major artists.

Wild Mountain Honey and Wintertime are slow rockers to feature back to back. It reminded me of so many listens to that album, casette and CD… the keyboard work and sound on W.M.H. is fabulous.

After Dance, Dance, Dance the band heads back to the hits with “Keep On Rocking Me Baby” and the crowd sings along… Steve sports many guitars throughout the night and finishes this one off by flicking the guitar pick right past my wife never to be found. (doesn’t matter he flicks out 25 more at the end of the show)

Steve Miller | Keep On Rocking Me Baby | Toronto 2008 from concertaholics on Vimeo.

The Joker fits in nicely to the setlist here as this becomes “feed the crowd what they want.”  Jetairliner closes out the main set….

The encore was another 3 hits and when the last song Jungle Love started I had actually forgotten about that one… The audience seemed to get their fill by now and although I was glad I went to this show it just seemed to lack some authenticity. Not sure what and it’s no big deal. It just kind of felt like I saw this band 10-15 years too late. As I mentioned for me coming off the Black Crowes show at Massey Hall and a first time Jam with the energized My Morning Jacket. …this type of show is one for the “been to” list only. It was far from bad… it was just a decent concert and I love concerts. What does that mean? It’s not a repeater if the band came back next year. 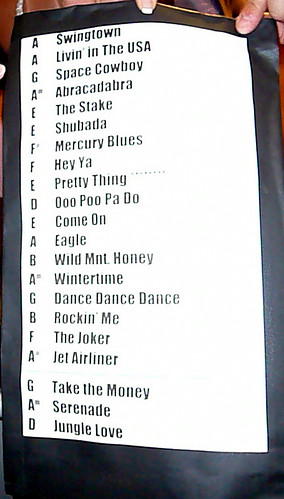 I managed to grab a photo of the setlist and as we mingled around after Steve Miller had frisbee’d out 20+ guitar picks… we searched for the one he threw earlier… found nothing… then as we were heading for the stairs a guitar tech held one up and tossed it out and it landed right in front of me and my wife. 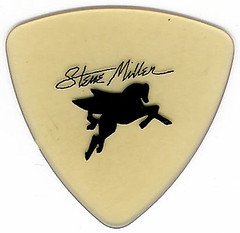