First time seeing the Black Crowes for me was August 15, 1992. The Crowes performed a free show at G. Ross Lord Park in Toronto, Ontario to celebrate the 15th birthday of our local radio station Q107. It was packed… and we wiggled our way towards the soundboard. When we got there some of the members of the Kids In The Hall were right beside us. 16 Years later …Kids In The Hall member Mark Mckinney walked right past us out front of Massey Hall.

I saw them again in 2005 at the Kool Haus with my wife and we loved the show. It was a real Rock and Roll concert. So for this show I asked a good friend of mine to say a few words about his take on The Black Crowes at Massey Hall……………..  Jeff 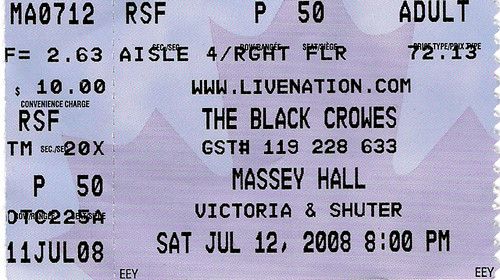 It is customary that when reviewing a concert that the reviewer be very familiar with the band’s catalogue and history, citing songs played and the albums they are from etc.  I am not familiar enough with the Black Crowes to be able to do that, like many I remember them being very big in the early nineties with Shake Your Money Maker, and although I know they have continued to produce albums and tour I paid them little notice except for the occasional news story about their front man marrying that famous girl.  I’d heard enough however to know that they were a live act worth hearing and since I no longer attend as many concerts as I once did I tend to be a little more selective about who I see.  The Black Crowes were near the top of my list containing ‘bands I haven’t seen but would like to’, add Massey Hall to the equation and there I was. 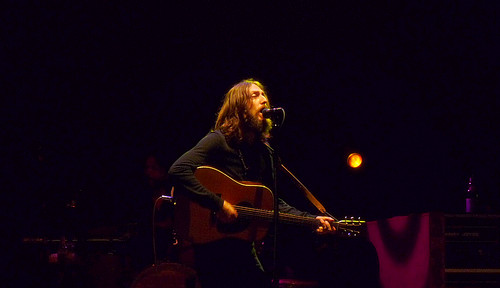 I missed the opening act unfortunately and when I found my seat I noticed immediately the smell of incense, it was like visiting that cool hippie friend that always has incense burning.   A large man standing behind a soundboard on stage left introduced them as “Your friends, the Black Crowes.”  The band sauntered out in the most relaxed stage entrance I have ever seen, the house lights were still on when they were strapping on the guitars.  The reception was warm from a crowd made up mostly it seems of people who had been paying attention these 15 or so years.  Even before the first note was struck it was apparent that this was going to be a no frills, here’s our tunes kind of set.

The sound in Massey Hall is outstanding and well suited to a rock show.  The Crowes seemed right away to be able to pump it out loud and have it land soft.   They are a band of delicate balance:  their not-too-hard-edge bluesy sound makes their tunes easy to like on first listen and they don’t rely on hooks. They are a guitar band but the guitars aren’t rammed down the audiences throat and are 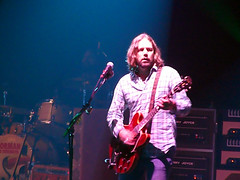 Chris Robinson’s singing style is effective and fits in nicely with the players behind him.  His voice is like another instrument and he accents certain lyrics and notes to compliment the arrangement.  As a showman he has a little bit of Jagger but very little.  He moves like Mick only a great deal less.  During instrumental parts and solos he would drift back in front of the drum kit and move in own subdued groove.  One funny moment I noticed was when he knocked over the mic stand, often times you’ll see a stagehand scamper out and prop it up again.  In this case the large man behind the board on stage left walked slowly, deliberately, and seemed generally pissed off at having to carry out this task.  I’m pretty sure he stopped and was giving Chris the stink-eye over it.  Robinson seemed unaware of the incident and just carried on his low-fi dance. 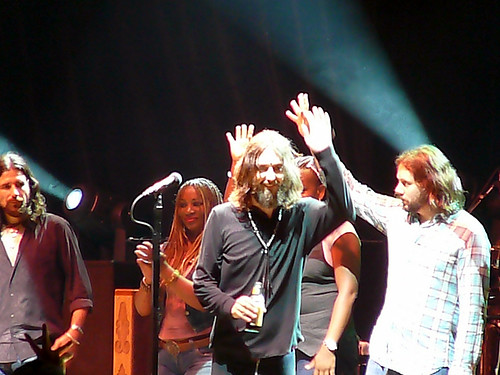 I confess that I was hoping for one song to be on the set list.They did play Wiser Time and I loved it, but I enjoyed each song they played and can’t wait to hear them again in October when they come to Buffalo.

Security asked me twice to stop video taping with my camera. I was not happy at all….but made it thru almost 5 minutes of Wisertime.

Dark Side Of The Moon | Pink Floyd by Classic Albums Live