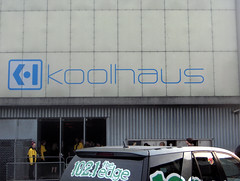 When the alignment of a really good band, a really good venue and a general admission situation that allows the opportunity to arrive early and get up close, great things can happen!! They certainly did last night as The Raconteurs brought their sold out Nashville Tennessee Rock & Roll show to the Kool Haus in Toronto!!

I was so glad to hear that the show had been moved from the Ricoh Coliseum to the much smaller venue. I guess Kool Haus may hold 1500 at capacity. Aside from venue size I understand the acoustics at Ricoh are not the greatest. I haven’t witnessed it first hand but have heard this complaint more than once.

First off Jack White is impossibly pale. He must work at that look!! Workin’ nights staying away from daylight!!

The band rolls right into Consoler and hardly takes a breather for the first few. I guess about 4 or so songs in we get Jack on the keyboards for You Don’t Understand Me the keyboards are so nice!

This is a serious working band and doing it very, very well. It’s been awhile since I was this sweat soaked after a rock show.! Yep! There is still some crowd surfing happening, some moshing and even one nut trying to rush the stage on Brendan’s side, who was promptly grabbed by his shirt, pulled off the stage and tossed!

The music is what it is all about and we heard lots. I think the main set consisted of 15 tunes and the encore 2 or 3. The encore tunes are highlights Salute Your Solution and Many Shades of Black with out a doubt. In the main Steady as She Goes, The Switch and The Spur, Top Yourself, Old Enough and Hold Up. Really the whole presentation Rocked!! Top Yourself really kicked some ass as did many others in the set.

One of my favorite highlights is the part of Intimate Secretary when Jack does the distant electrified microphone vocal. There is a device and / or microphone arched up over the amps and speakers fed back into the back of speaker or amp and a mirror setup so when Jack turns to use the microphone you can watch him do the vocal in it. The golden yellow lightening works here. The overall effect is excellent! When it is all happening at once it gives a really overall cool effect.

Jack uses some pretty crazy effect devices. If you look closely at the amp over his right shoulder in front of the mirror he uses you can see a few effects devices there. There is what looks like a coiled copper roll of some sort and a few buttons. I couldn’t really see what they were but it is fun to watch. At one point he is even using the on / off switch for effect on his older Gretsch electric. Part of fun is the equipment and how the band uses it. This band has some pretty vintage looking guitars. Check them out if you can.

By no means is this a Jack White only show!! Brendan Bensen more than carries his share and in the case of last night’s show, a little more than his share. Jack White let us know right away he had been to then doctor and the doctor said,” Jack you got to stop singing for awhile” and Jack replied ” doc I have to go up to Toronto to do a show”. He went on to say how Brendan was gonna carry some of the work!! At any rate there was only 1 or 2 spots where you could pick up that Jacks throat was a hurting or at least getting hoarse. 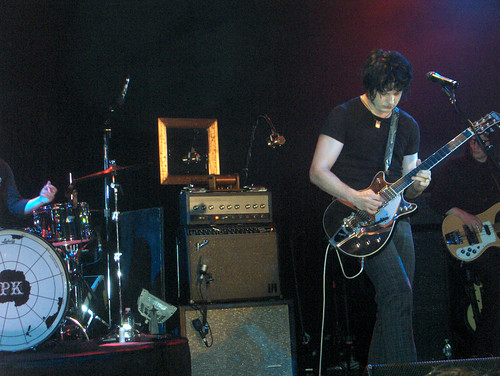 These 2 guys together are lethal!! We can only dream of the possibilities this pairing will come up with. I didn’t get into the Raconteurs until Consolers came out. I heard the hype but man after 1 or 2 plays of Consolers I was hooked. I hear tons of classic rock influence along with some bluesy Nashville kind thing.

Being up close… I was listening to the stage monitors and speakers on the stage as opposed to the hanging speakers blasting out to the cavernous bar. This is somewhat like having a band set up in your garage. Perfect buzz!!! Perfect rock show!!

I don’t think next time around the Raconteurs will be playing a venue as small as Kool Haus. After the round of festivals this year and concluding the long tour they are on, next time out it will be bigger venues for sure. I guess that depends on goes with the Greenhorns and The White Stripes. My call is for more Raconteurs!!

Another highlight for me was during Blue Veins as the stage was bathed in all purple lightening and the band stretched out the tune with a very fine instrumental. This slowed the pace down it a bit and crowd rolled with it. The song Together also had a calm mellowing effect that had the crowd singing along nicely! Man it all worked!!

I got to tell you, these guys can really, really work the guitars!! Some nice older Gibson & Gretsch electric guitars, get played and a really nice acoustic Gretsch comes out a few times. Just magic…. sounds

Touring with only the 2 albums under their belt (lets hope there are many, many more) Broken Boy Soldier and 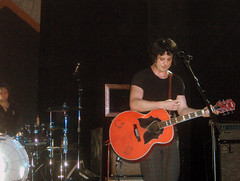 Consolers of The Lonely, as you could well imagine the set contained a huge representation from both. The albums combined have about 24 songs and we heard 15 or 18 last night. After the show I asked for set list and the tech guy said we don’t need one. I guess that does kind of make sense if you are playing almost all your material! Like 75% of it all!

At the midway point in the show Jack introduces the bassist in the band by referring to Jack Lawrence the bass player as “this handsome blacked haired boy”. The rhythm section sounded very tight. I caught the drummer Patrick Keeler just after the main set look at Brendan and give a huge headshake as if to say man what a workout!!! He was seriously working the drum kit. The entire band was sweat soaked and having a blast. Patrick must have tossed out 4 or 5 drumsticks near the end of the show. Jack was throwing out the picks.

All in all this was a really fine show!! It doesn’t get any more fun than this. Getting up close and having the full “rock band in your garage” effect is what makes this all worthwhile. Try it sometime. You may never sit in the uppers again! I always felt I would rather see a good band in a good venue than seeing a great band in any venue from shitty seat! Just my point of view!! I know there are people who love to just sit back and take it all in. Hey anyway you want to express you love of music is cool!!!

To top the evening off as I got to my truck to drive home I looked over at the downtown skyline just in time to see a huge bolt of lightening strike the CN tower. Now that is alignment!!

See you in the front row….