Discovering … My Morning Jacket. It started with frequent reading of Live Music Blog who seem to really dig this band. Only months ago after reading articles and reviews I decided to head over to youtube and watch a few videos. Goosebumps from a youtube video of a band I had never heard before was a good sign. So I grabbed a couple of their CD’s and found out they had just been in my home town here playing at a Berkeley Church. Damm I missed. No fear… they are coming back so I grabbed this ticket below.

Having had a few friends tell me they knew about this band got my mind racing with thoughts like “why didn’t you tell me about them before”… I had read about the festivals, the setlist from Bonnaroo and the future Madison Square Garden show this coming New Years Eve….

then why am I standing in front of one of the lower end concert venues in our city? Kool Haus is not known for great acoustics… but much like my last visit here a couple years ago to see The Black Crowes I planned on being CLOSE so it wouldn’t matter too much.

I strolled in past the vendor selling merchandise who I knew and took my concert stance 2 people from the front rail just on the right side. Opening the show was a band from Montreal, Quebec called The Besnard Lakes. A very decent set from these rockers who had some really cool keyboard sounds layered into their songs. In one of their extended tunes I felt some “Oasis” and the crowd seemed to offer up a nice response.

Evil Urges | My Morning Jacket | Toronto | 2008 from concertaholics on Vimeo.

My camera audio does the stage sound no justice. It was loud. Real loud. Clear too and the separation of instruments was excellent. Wow. I felt like I knew these guys already and I didn’t. Jim’s Screams, the strobe lights hit, the guitar army starts…. and the Drummer... yes! 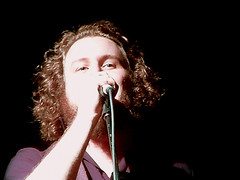 early on the bass player caught my eyes, ears and full attention. After seeing years of guitar solos and drum solos it is rare for me to talk about the bass player… but this guy is a bass-wizard. By the time the anthem “Gideon” hit me… the songs I knew sounded much like the album versions which I don’t mind when they’re piercing loud. I love this song and I’m a smiling new fan who feels like he found out about a secret he had been looking into for years.

Highly Suspicious sounded better live for me than on the album and up next although it’s a laid back track I enjoyed “Thank You Too” and grabbed this one on camera also. Enjoy [ Thank You Too Video ]

After “Lowdown” we get Super Jim with cape and all telling us how some of their equipment got wet at Bonnaroo… leading right into the atmospheric Touch Me I’m Going To Scream Pt.1

My Morning Jacket | Touch Me I’m Going To Scream Pt | 2008 from concertaholics on Vimeo.

Each song seemed to change the mood. The lights. The influences… For one entire song I was hearing something and couldn’t put my finger on it.. finally it came to me… Supertramp. Then I heard some Neil Young guitar sounds and even a Sabbath riff from one of Jim’s guitars. I was having concert flashbacks dating back to my first show in 1984. The Energy, drive and musicianship I was witnessing was identical to what the forums said it would be. Wicked. 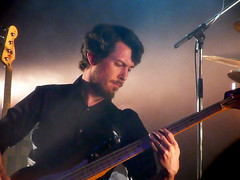 The keyboard sounds blended so well with the guitars and when the time came …the pedal steel for a few songs seemed perfect. I still was drawn to Tommy on Bass. Finger-work aside his style and guitar selection was just so fun to watch when Jim wasn’t knee-sliding in front of him as Pete Townsend use to years ago.

On the way down to the concert I was listening to the new CD and after hearing “Smokin from Shootin” I actually hit replay and listen to it a second time. I just really got into that tune at that moment. So when it was played live tonight it took on a nice feel for a new song that I was just getting to know.

To finish off the smoke filled set we get Jim James alternating with guitar on his back and some electronic frisbee shaped device that he played with for 8 minutes or so to present “Touch Me I’m Going To Scream Pt.2” This was a real treat and quite mesmerizing for those of us who haven’t seen or before. Truthfully I could’ve continued watching this song for another 8 minutes.

My Morning Jacket | Touch Me I’m Going To Scream Pt2 | 2008 from concertaholics on Vimeo.

Although I recognized a couple of the songs in the encore from the few listens I’ve had in my short 2 month MMJ Fandom I cannot give you the detail a veteran fan could here. I will tell you this. When they kicked into one of these songs… the volume and crowd reaction Led me to believe I was seeing Zeppelin do Kashmir. It was interesting to feel that the band was playing a song everyone wanted to hear, yet I didn’t really know it as well as I plan to one day. It didn’t matter. The monitors were starting to shake, melt and scream like Lynyrd Skynyrd on 78 record speed. My ears hurt. Jim was running around faster and faster and Tommy seemed to be playing bass with 17 fingers while the keys burned into the powerful drumming-master that anchored the entire rock-stage. I remember much of this happening during “On Big Holiday” and finally as we launch into the closer “Anytime” I found my head bobbing back and forth like a tennis match between musicians as they jumped, spun and played like athletes. Here I noticed the montior that was strapped beside Patrick on the drum riser was actually rocking-back-and-forth… yes it was moving – check it out in this video clip along with a few of the final moves during Anytime.

Anytime by My Morning Jacket | Toronto | 2008 from concertaholics on Vimeo.

The song finished out loud & strong with Jim setting his guitar against the amp moaning with feedback. He came over to hand a few high-5’s out while the rest of the guys waved away to exit stage left.

The setlists got handed out and I managed to get a snapshot of one before walking out to see my friend running the Merchandise booth. There was one song on the list not played. “At Dawn” 1st on the encore. 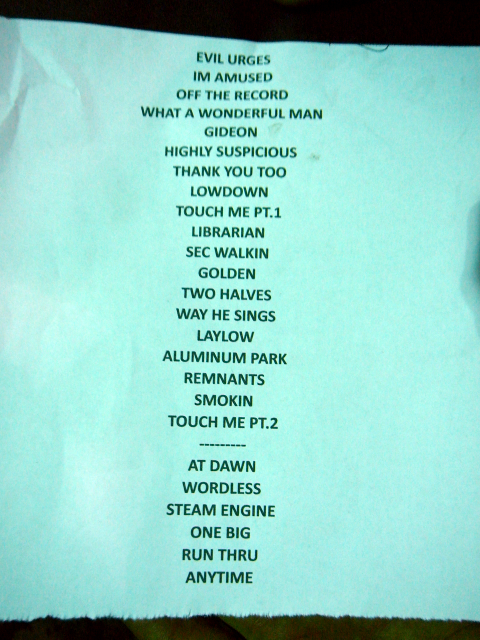 Over to the Merch Booth and the lead singer of the opening band was there counting his bands sales for the night. I chatted with him briefly and mentioned that I enjoyed his set… especially the girl on keyboards and her sound. 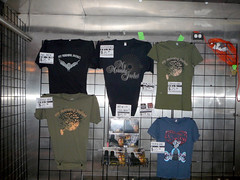 The MMJ Tour Manager dropped in to get a rough number of how sales went. My buddy is good. He doubled what they normally would do for the head count that night. I grabbed a couple stickers for the kids of course and chatted for awhile as the Load-Out went by us in the beer canned hallway.

About 1:15am I said good buy to my friend and ended up followed Carl Broemel down the hallway. He was pulling a suitcase with one hand, drinking a beer with the other and kicking a gig-box on wheels towards the door. 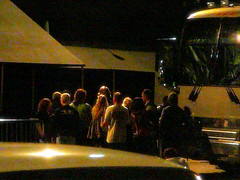 Outside he handed off the gig-box, dumped off his suitcase at the side of the bus and then sauntered thru 11 or 12 fans at the front of the bus and turned to sign a few autographs.

See all the My Morning Jacket Photos

See all the My Morning Jacket Videos

Leave us a comment about the show or where I can get some DVD Bootlegs since it appears it will be awhile before these guys are back here in Canada. Hmmm maybe Chicago?

Use the Player below to actually listen to the entire show live.

Posted in: My Morning Jacket
Prev