Tom Petty and The Heartbreakers

Third show into the tour and it was very apparent Tom Petty & The Heartbreakers are happy to be in Toronto. After the great show Steve Winwood put on we were ready for Tom Petty and we get 2 hours worth with lots of hits and some cool rare stuff.

From the first chords of the opening song You Wreck Me, we were on our feet and Tom was smiling and laughing was encouraging clapping and singing. We get Mary Jane’s Last Dance, I Won’t Back Down and Even The Losers before we take a breath!! 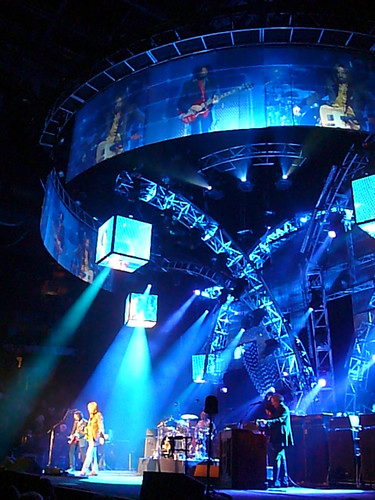 I have to say the stage design was really outstanding. There were these 5 “branch” like metal beams that come up from behind the stage and hang over the band. On each “branch” hung a square grill that seemed to be covered in LED lighting but could also play video. The video image could wrap the square and there were lights inside the squares. Believe me my description doesn’t do a thing for this state- of- the- art setup.

Go see it for yourself !!! Huge audience participation for Free Fallin’ amazing sing along and the keyboards really jumped out here. The crowd participation is particularly high tonight!! At 1 point Tom asks for the house light to be turned on and he gestures to each area of the arena. This isn’t some band cliché he and the band are genuinely having a really good time. It becomes magical when you catch a band it this place.

We get Honey Bee from Wildflowers followed by a ” rarity” Sweet William. I guess maybe not so rare because plenty of people seemed to know it. Tom introduced this song by saying “it was an obscure “B” side that was only released in Iceland or somewhere like that”. [video clip of the intro here]

The intro into Spike was great!! Bear with me as I will try and repeat the intro as best I can. 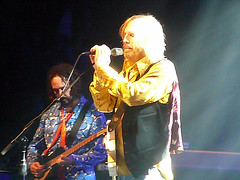 Tom says, “ we grew up in north Florida and there was this bar called the Cypress, man I was afraid to go near the place because there were some really bad dudes that hung out here I mean there were babies killers in this place 1 day I saw this guy I mean he was covered in piercing I mean his head was pierced he had a dog collar on and he goes in the Cypress I gotta go in there and see what is going on I go inside and its dark I can’t nothing but there is a glow in back from the jukebox and in the light I can see these to guys in the back and I head back there and I hear them say….oh we got another one…just like the other ones…another bad-ass another troublemaker… Spike!!”

End Of The Line was certainly a highlight from The Traveling Wilburys who in the day fit the super-group bill with their line up. I think Scott Thurston did the Roy Orbison part from the tune and it sounded really nice. We get the band intros here and when Tom introduces an original heartbreakers member he introduces them as an “original founding father”.

Here we go The Waiting nice… I think I got blown away by The Waiting Mike Campbell just explodes here.

I can’t recall anything until Tom slowed it down with Face In The Crowd nice choice for a mellow tune. I know he introduced this one with the line, “we haven’t played this one for 15 years but I’m feeling brave”!! 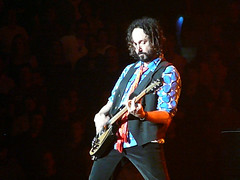 I have to hand it to Mike Campbell his guitar work is really awesome tonight. I love the guitar and I have to say I was impressed with his playing this night!! I hadn’t seen Tom Petty and The Heartbreaker since 1981 or 1982 at The Buffalo “Aud”. When he was still playing Night Watchman. He does Rebels and then into another great song with awesome audience participation Learning to Fly…the combination of the audience and the baby grand piano was just beautiful!!! He slowed it down enough to let the piano and audience really stand out in the mix. Check out what it was like at this moment..

It’s black…Side stage… there is nothing better than anticipation for a killer encore… here is a clip of Tom and The Heartbreakers coming back up the stairs to a roaring crowd….

Runnin’ Down a Dream was fast and furious…then Tom intro’s the next tune by saying lets do one for Bo Diddley…(who died earlier this week)…I didn’t recognize the entire song /mini medley I think that is what was going on… but know Gunslinger. Nice tribute!!

American Girl closes out the show…overall a really entertaining show…high marks for being so pumped to be playing this night and super high marks for the great interaction with the audience and generating (not that we needed too much help) a lot of participation. 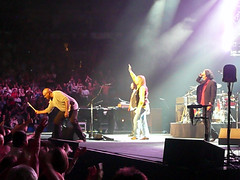 As with any show from an artist that has a huge catalogue of material, there will be the usual grousing about ” ah!! He didn’t play this and he didn’t play that” You know what if you want different songs go to more shows!

See you in the front row…

To see all of the Tom Petty Photos go here

To see all of our Tome Petty videos go here