This is the first of two Eric Clapton shows I am lucky enough to have seen on this short 2008 summer tour. If I hadn’t thought about going to Montreal before the Toronto show there would have been no way I would of missed Montreal after witnessing the workout the painted silver stone strat got Tuesday night. Man it may have been a cold day in May even by southern Ontario standards but the blues were red hot and Eric Clapton and the band were on fire. 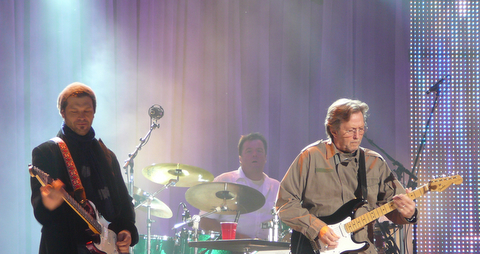 Hello 461 Ocean Blvd. glad you could make it…Motherless Children as an opener was a really nice. The bells were ringing already, vocals are strong and we were only just starting. Doyle was wearing a scarf and EC had on an army style jacket with the neck pulled up tight. There was a rented heater blowing warm air across the stage. From my 6th row vantage point I could tell EC was feeling a little of the cold wind blowing. Every once in a while he would release the neck of his guitar to flex and rub his fingers. I never for a second felt it was affecting his playing. Consummate professional all the way!!!

Bring on the blues …here comes Key to The Highway…Doyle does fantastic vocal support in this and other tunes. When you catch Eric Clapton doing the little leg lift he often does…it is pumping pure blues!!! Highway is followed by Hoochie Coochie Man. Cold wind or no cold wind Eric wasn’t holding back for anything both these songs had stellar solos. If only I could see for a moment what Eric sees when he tilts back with his eyes closed and lets the music flow. It is just mesmerizing to witness. Little Wing is easily one of the many super highlights. Little Wing is such a majestic and beautiful song. The band took it to the top for a good 8-minute version with EC stepping out several times. I don’t think there is anyone who could come close to this quality, maybe Stevie Ray near the end of his life. At the end of this song everyone is smiling including Jimi.

The band is smaller then the last tour and a really remarkable group of players. Pino Palladino is the tallest, lankiest bass player you will ever see and his part of the foundation is rock solid. It is pleasure to look over and watch him groove. I caught Pino checking in with the crowd and feeding off them every now and again. Ian Thomas fills the drummers seat very well. He has the band soundly and precisely anchored. The song Double Trouble follows Outside Woman Blues. It is tough to pick any one highlight over another because there are just many gems and highlights. Can’t beat live music!! Double Trouble rocks hard live. The Marshall amps were just humming!!! Don’t Knock My Love is up next…. I really love this Wilson Pickett song done up like this. I could listen to it 20 times in a row.

We head into the acoustic sit down set with EC out at center stage by himself for the tune Driftin’ Blues. At this point he has switched his strat for the 6-string acoustic I think it is Martin. Pretty low down stuff here it is nice to see EC work his magic on an acoustic. The set up works great. There is a carpet laid out on the stage and if there was a couple of lamps and a sofa we could have been in Eric’s living room. 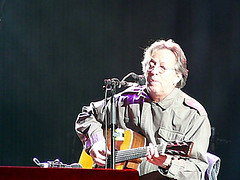 The acoustic set reduced the large amphitheater down to an intimate setting. The band comes back out for Rockin Chair. The song sounds so inviting you are almost looking forward to the tangled chair and judgment day!!! Rockin’ Chair is followed by a tune off From the Cradle, Motherless Child. This was played on a nice sounding 12-string with a great rockin’ tempo. Check the lyric,” I had to go so far girl…to get my ham bones boiled” – I love it!!! Doyle throws in some more great vocal stuff here as well. Robert Johnson’s Traveling Riverside Blues takes us further down stream into Running On Faith, which is the first of 2 songs representing the classic Journeymen album. Eric’s vocals are better than ever and Running on Faith profiled them beautifully. He we go back hardcore…. Tell The Truth which had been the show opener for the first few stops on the tour. I can easily see why it worked as an opener. This is a great song that got another tremendous strat workout by EC. Tell The Truth is followed by what may be for me the #1 highlight…Little Queen of Spades.

It pays sometimes to up so close you can see the facial expressions and body language. As mentioned it was cold and EC was feeling it here and it paid off in spades. At the point in the song where Chris Stainton takes the song over for a brilliant keyboard solo EC motioned to his tech guy for something who came over left came back and handed EC something for his fingers EC spoke to Doyle who it appeared went over and let Pino know there was going to be an extended keyboard solo while EC warmed his fingers. It worked the keyboards rocked!! At this point Eric was even putting his hand in his pocket to warm it. At any rate when he was ready and his fingers warmed he turned back around and lit into a solo that was so friggin’ amazing it made the hair on the back of my neck stand up…I’m getting goose bumps as I write this reliving it!! It was just so far out there, so absolutely stellar!!! Word couldn’t put it into prospective. Next up is, Before You Accuse Me – the nice bluesy rocker that takes us into mellower sweet Wonderful Tonight always a crowd favourite. I believe it every time I hear him sing it!! 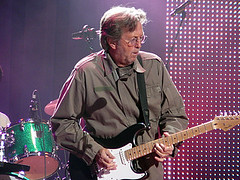 The lighting and stage set up was really well done not over the top just right. The heavy white lights came up as EC kicked into Layla you know there was serious hair pulling going on when these opening chords ricocheted around the venue. Chris Stainton steps out again here in the latter part of Layla…so nice…Doyle is a great guitar played because 1. Eric says he is, 2. He can chide EC with his playing enough to make him laugh and respond with his guitar 3. He can hold his own to the master and 4. He is a great guitar player, so subtle. There is no better show to be a part of then when you pick up how much fun a band is having playing. EC and the band were having fun tonight in Toronto.

After this run of tunes Cocaine was a little anti-climatic but proficient with Stainton stepping out on this one again and Chris did the trick. Compared to the guitar army treatment Cocaine received on the last tour (my opinion one of the best treatments Cocaine ever got – even better than the Just One Night version) and the following of Layla this time out I felt like I was missing something. Still a stellar tune any which way you get it!!!

The band leaves the stage and comes back for the song I Got My Mojo Working. Robert Randolph was brought back up to play the steel on this one and EC gave the lead over a couple of times to him. 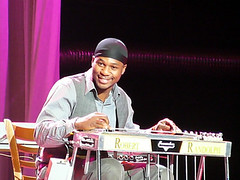 It was cool to watch Robert accent some of the Lyrics EC was signing a couple of times with a hard slide. This made Clapton laugh a couple of time and Robert was truly in his glory. EC would give him the nod / push to keep on taking the lead and keep on playing. Everyone was obviously having a great time at this point. At the conclusion the entire band come forward and they took a shivery bow.

In my opinion this show / tour set up would make a great live album and DVD.

For a man that is in his sixties and by his own admission almost deaf he is looking, playing & sounding better than ever!!!

As cold as it was I never heard 1 person complain about the cold. Yes EC can make you forget about the weather!!! 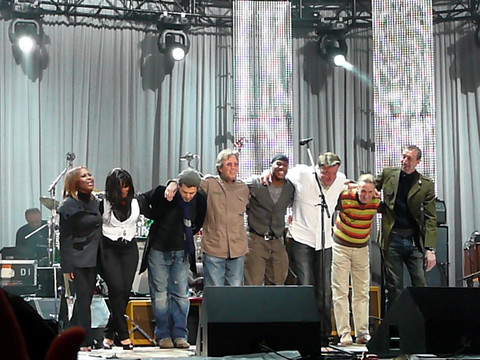 Beyond the end of the show I hang out and watch some of the load out and I ask and get a guitar pick. Expecting to read after I caught it “EC Summer Tour 2008” or something along those lines.

The pick read Lambert Simnel and the Marzipan Band.

I looked up Lambert Simnel and he is found he was born in 1400’s and was somewhat of an imposter to the throne and eventually ended working in Henry the Vll’s kitchen. Anyway I thought maybe this was an inside joke of some sort with the band or a fluke that I was thrown the wrong pick. Anyway to make a long story short I got another pick in Montreal same thing expecting to read EC Tour 2008 but instead it reads, “it’s all in the Trousers” touring 2008 etc. Maybe it is an inside joke. If there is anyone out there that knows the joke let me know by commenting.