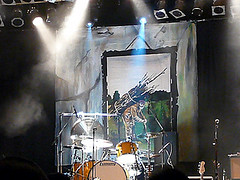 Great backdrop tribute I must say. That’s Art! The first two songs of Classic Albums Live’s Led Zeppelin IV were a warm up for myself and friends as we all settled into Black Dog and some good ole Rock and Roll.

Battle of Evermore by Led Zeppelin is a song that I always look forward to. One version that stands out by the band themselves was from the Page-Plant Unledded back in the early 90’s. It is nothing short of magic. Speaking of “Magic” lets settle into the “Battle Of Evermore”. This is where Leslea and Nick’s vocals started shining the hearts of the Phoenix. This song was trying so hard to land above the Stellar personal favourite performed in 2005’s Houses of The Holy encore set… . Again the dual vocals including Leslea’s Spiritual Swagger on this song was a highpoint and made me pay even more attention to the two of them both as the set rambled on.

The guitar army on Stairway To Heaven was in fine form. Challenging even the finest of ears on such a recognizable tune… these guitar moments went so well with Linz keys-work… It all worked the way Craig promises. I clearly remember the tones of the guitars being so bang on… and of course Leslea’s voice weaved into the album here… just enough to authenticate Plant where needed. 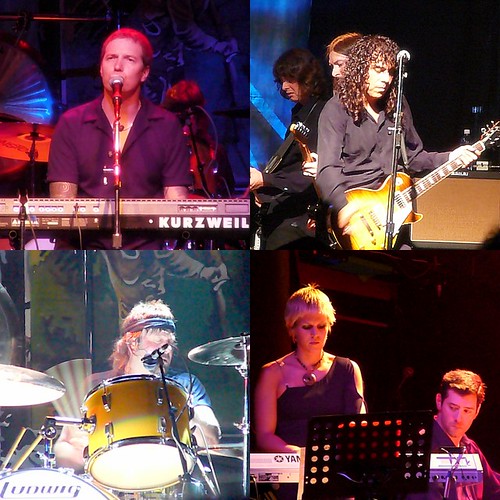 When you have seen the same band play live a dozen or so times before one tends to have a few favourite tunes or even a moment within a song that you anticipate. For me I can say that “Four Sticks” would not have been near the top of my list for Zeppelin IV. I have always appreciated this song and the drumming that goes along with it… but for some reason this rendition just seems to catch me off guard and before I knew it I was in the grip of a groove I love.

The video clip below is only the last 1:34 of Four Sticks and doesn’t convey exactly what I felt… it still showcases Rick Vatour closing out the song nicely.

Going to California was vocally very good. The one thing that stood out was Dom seeming to be challenged on one of the picking parts on the mandolin. Maybe seeing it done so perfect before allowed me to notice it this time? (or was it the sound/mic’ing?) –

Then comes that anthem that gets the floor almost bouncing to the timing of the song itself…due to a group dance that seems to happen on this wicked album closer. Sliding guitars, bass master groove with the drum machine himself…then toss in some cocky vocals. Go for it. Then Craig-bring on the silver chocolate-bar- You gotta love the harmonica on this one… Ladies and Gentlemen… When The Levee Breaks !

When The Levee Breaks by Led Zeppelin performed CAL 2008 from concertaholics on Vimeo.

The Zeppelin encore with CAL really seem to take off. I mean bringing in the mellotronon The Rain Song. Quiet at times… it was easy to get lost in this song. Even James Gray had a curious smile as he watch on during this song and a few others from the Top Left Shelf of the Phoenix. The Zeppelin encores at the Phoenix really do pick up speed. I find Nicks vocals get better, warmer, louder. We all know it gets louder by this point.

For me the the guitar feedback slide ceremony of “Whole Lotta Love” is mind boggling. I couldn’t believe it. First the guitar-army again all going into solo mode and then hearing people talk during this part of the song. I mean genious-fest on stage and the drunkards are babling about whatever. Even a good friend mentioned he was surprised that it was ever so close. This same friend mentioned he thought that “Celebration Day” was a little shaky. When I introduced myself to the drummer himself Rick Vatour after the show he told me that that was the bands first time trying out Celebration Day ! Ok then.. good job.

Kashmir “keys”, The Song Remains the Same were all very stellar with another engery-packed Moby Dick including drum solo. I caught Craig standing just behind me with a big smile for this part and then he deeked away… obviously happy with another authentic tribute to one of Rock’s greatest bands of all time.

Thanks again to the artists and the entire Classic Albums Live crew for keeping things the same after 5 years in the right areas…. and of course also willing to try new things in year 6!

More Photos from the Evening