Montreal marked the 10th time I have seen Eric Clapton. I caught him twice in 1984 with Rogers Waters, three times in 1985 twice on The Behind The Sun tour and up close and personal at Live Aid in Philly, 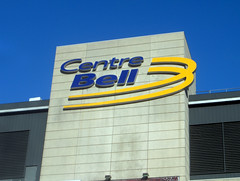 twice on the From The Cradle Tour (dressed in white workmen’s’ pants and white t-shirt EC steps to the mike at the start of the From The Cradle shows and says,” there will be no pop tonight”.) 1 show in 2006 at The Air Canada Centre in Toronto. Tuesday May 27th 2008 was number 9 in Toronto at The Molson Amphitheatre and the next night in Montreal, number 10.

Total round trip was 1134.4KM from my driveway to the Bell Centre. I had a center floor row B seat. Beautiful!!

Just as an aside to the review I really love seeing a parent or parents with their son(s) or daughter(s) at these shows. It is a great gift passing on the thrill of seeing a rock / blues legend like Eric Clapton to child. 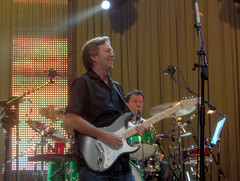 This is a good example of the shows consisting of the same set list but having many differences in the performances. Most of these differences are the changes in the soloing and sharing / throwing back forth the guitar work. Everyone was clearly having a great time and I would venture the fact that it was nice and toasty inside the venue compared to what they experienced the previous night in Toronto and that the crowd was super enthusiastic helped a lot. There was certainly a higher buzz of pre show anticipation here than Toronto many happy faces!!! I love the pre show buzz it builds and builds!!!

Motherless Children is good opener as the tempo gets the joint rocking right out of the box. Into the blues and Key to The Highway where in opinion Doyle really step out with some great vocal stuff and guitar work. Hoochie Coochie Man next.

I catch some nice interplay between Eric and Doyle, every once in a while Eric glances over with a smile a laugh as Doyle pushes the envelope just a little. I could of listened to Little Wing forever it is that good live!!! The next few tunes are heavy!! Outside Woman Blues – Cream all over again for me!!! Double Trouble and then Don’t Knock My Love follow. There is some nice pushing of the guitar work by Doyle!! Eric laughs a lot!!! I pay a lot of attention to the bass and drums. These guys are tight, tight, tight!!

The sit down set is beautiful really nice, EC out alone for Driftin’ the band then the joins in for Rockin Chair and Motherless Child. Doyle really gets into Rockin’ Chair vocally and with his axe! Eric introduces Traveling Riverside Blues as a Robert Johnson song. Eric doesn’t talk much but he says “thank you” often. We get Running On Faith. Montreal version was just so outstanding for me maybe it just hit differently this time out it really was gorgeous.

Again, Tell The Truth and Little Queen of Spades back to back are show stopping, killer tunes. Doyle is pushing EC again with the guitar playing. Chris on the keyboards is taking it out there and he really shines all over but the keyboards on Queen of Spades and Layla – just amazing!! It was around this time where there was seemingly some kind of signal from security as they just walked away from the aisles and anyone who wanted to could come up front. As you might guess there were plenty!! Before You Accuse Me followed by Wonderful Tonight. I can’t say enough about how strong Eric’s vocals are right now. It blows me away how great sounding he is. He comes Layla, the guitar and keyboards awesome. Along side Eric, Doyle does a number here that is beautiful. Chris is note for note from the original or as close as you can get. I take it all back. I wasn’t particularly moved by 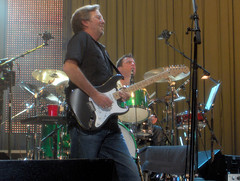 Cocaine on Tuesday night but in Montreal EC pulled out a solo that had him tilted back so far if his eyes were opened he would of been staring at the rafters!!! Just crazy electrifying stuff!! 1 of those goose-bump moments!! The drive was worth it just for this tune alone!! Cocaine was definitely a highlight this time out!!

Encore has Robert joining the band again for Mojo. As I mentioned before, it is so fun to watch a guy like Robert Randolph playing with Eric. He looks every bit like a kid having fun and Eric pushing him to take his solos further out there. The whole band grooves on this.

After the bows I hang around ask and score a set list and another pick. Still not sure what is going on with the picks. 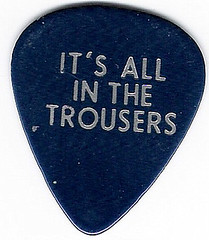 I expected to find EC tour 2008 on the pick but instead it read, “it’s all in the trousers”. Anyway still thinking it may be a inside joke of some sort because it would take more to sort out a pick from your pocket that reads this than to just throw a tour pick.

This is only an 11- city tour in North America. The tour started May 3rd and finishes June5th before heading to Europe. Man I’m glad I caught these 2 shows!!

See you in the front row!!!

Check out what was attached to this setlist also besides the duct tape. 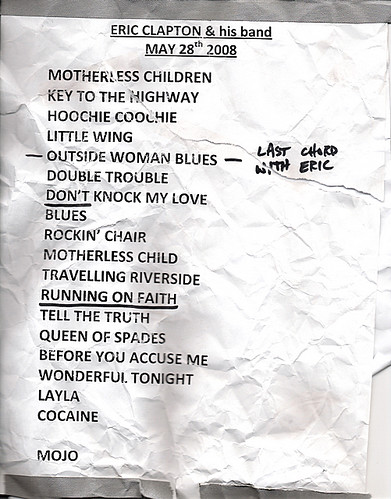