Seconds before the start of this concert I decided to head up front near the stage. As I got within a few feet of the right corner I noticed a piece of the stage that was calling me. “Come over here and lean on me… and feel the music” So I did. 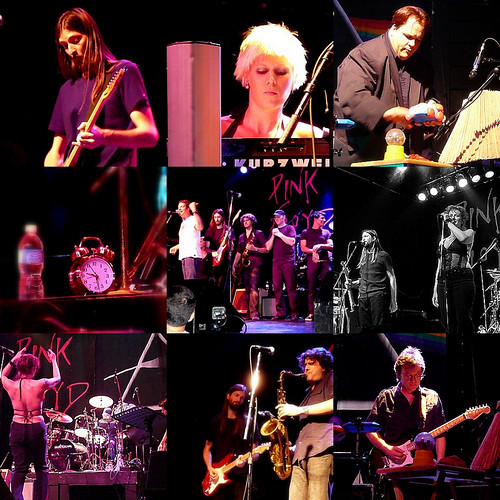 What a good move this proved to be as Dark Side Of The Moon started to unfold around me. This performance crept up on me, then behind me and finally back into the depths of my music sweetspot. Never have I stood here in the 5 years of coming to the Phoenix. Speak To Me and Breathe… drew me in… easily just on lead vocals alone. Rob Philips has Floyd in is blood. He kind of gives off that feeling that if someone missed their vocal he could do 2 voices at the same time… or if a drum beat was missed he would tap his guitar somehow and make it all sound ok. The baahaa’s and mumbling in the background always sounds so right. Standing right in front of Mr sound-fx himself it was nice to catch the vocal contribution from Murray up close as he and Leslea layered into the songs where required.

For those who wonder how Classic Albums Live recreate some of the unique sounds when doing Floyd… this video will allow you to peek into the FX side show abit. The “breathing” and “running” right out of the gates…. Alarm clocks at 3:10 ….then Leslea bangs away on the bass drum at 3:59… followed by the zoom in around the 4:57 minute mark for some fun with Troy.

If that didn’t kick you in the Floyd Trousers this sure will… I couldn’t put my camera down. Leslea walked back out for Great Gig in The Sky.

I’ve seen this done before…but I’ve never felt it. How deep do you dig Leslea in order to draw out what is needed to present this sort of magic? I mean at the risk of sounding un-manly or maybe manly… ah you told a story with this song I’ve never heard….zoomed in at 1:30 or so.. your eyes glossed over… I got it. I got the rest of the song too…

( I would tell anyone with highspeed to watch this video on “high quality” – the option is just below the right side on the youtube site here or watch above here.)

Side 2 started off with Money featuring some nice bass and allowed for some recovery from the Great Gig experience. I love “Us and Them” ..organ, piano, sax …soothing vocals. The band is just hitting their stride here and I would like to say the crowd was loving it all except I never turned around and was to zoned in to notice. …as the album heads towards the finish line… the vocals seem to get even better. Leslea just as serious about these parts of the album as her solo… Lindsay on Keyboards really anchoring down the entire arrangement at all times. So nice… and again Rob while not missing a beat on lead vocals adds in the Lunitic’s giggle… deadly guitar and this CAL team continues to all pull out their hammers and nail this version of Dark Side Of The Moon right where we wanted it.

The final 5 minutes of the album…

As for the talk over at the Classic Albums Live Forums the feedback regarding encore choices was mixed..which seem to bring out the musicians and producer Craig Martin to respond. We are lucky as fans of this series that we many times get to here about what happened at a show or even help persuade which albums get done or not.

For me as a music lover… I like good music…and when The Final Cut was pulled out I quite enjoyed it. Partially because I do not know it that well and also due to the fact that I’ve heard Comfortably Numb and Mother a 1000 times before. It was obvious Rob loved doing this one and it really got me into it… I even flipped the video on for this one….

Now you dive into “DOGS” and I am out of video… cool time to enjoy even more. I chewed this up like I had just come off a “fast”… everyone barking, the whining guitar and whodini on the keys.. it was all delicious…Funny during the last 1:40 or so of DOGs I was looking at Rob and watching him play but grooving to something else…I glance over and I am bobbing my head to the Bass Players production… I never noticed this simple part before in the song.. sometimes i don’t pay enough attention to the bass (I forget) well I caught this moment in time and glued in on Schnitzy’s fingers for the entire finish to this tune. I loved it. Loved it.

So I saw some Pink Floyd “radio listeners” leave at this point and turned around to see some others yelling out “Haha, charade you are” …

I swear I didn’t hear the “pig oinking” at the beginning of Three Different Ones and there were some cackles in Dogs with the equipment… but at this point the show was already picking up Junos so who cares.

The final David Gilmour “There’s No Way Out Of Here” is a song I may have heard one or twice before .. it was no DOGS… but I still really enjoyed hearing it and it reminds me that there is other music out there besides “The Wall”

Bottom Line – walk up front and touch the stage next? week.

More Dark Side of The Moon Photos over here