…I heard about this show sometime in early to mid April. I didn’t hear it mentioned as Chickenfoot rather Sammy Hagar playing in a band with Joe Satriani on lead.  Interesting! Then I heard Van Halen’s, Michael Anthony would be playing bass, more interesting!  Finally I heard the name of the band was Chickenfoot and the band would be rounded out with Chad Smith from the Red Hot Chili Peppers on the drums.

As of show time there had not been album out as of yet and there were only a couple of songs released on You Tube Down the Drain, Soap on a Rope and I think Oh yeah! Were the tunes with a scattered interview here and there.  This has all the makings of a great event concert, super group, small venue, hard to get ticket, wrist band policy and a sound / album that who knows may take off and become the next huge sound. You never really know. This was to be a 6 city tour to promote the album prior to release to get the buzz going kind of thing. So as I often do I hit ticketmaster on and off for days on end. Guess what?.. bang a couple of tickets show up. These tickets were selling for $300+ on Craigslist (if you could get one because of the wrist band policy & purchaser having to be present to enter with the guest). 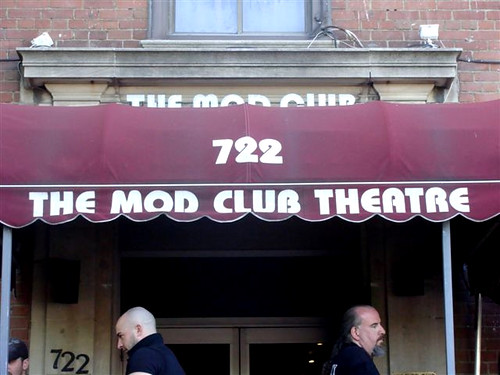 Anyway I scored 2 tickets and away we go.  The of the day of the show I go down pretty early as I like to get into the whole vibe / pre show buzz, especially for this type of event. I get down to College Street and get in line. There are maybe 20 people already in line at 3:30PM. I quickly ascertain the process for the ticket sale etc. There is a fan club VIP line (maybe 20) then the line I was in. The game plan is to get a wrist band when you are checked against a list as a registered purchaser and upon entry we are given the hard ticket. I mean literally as you walk through the door into the venue we are handed a ticket. 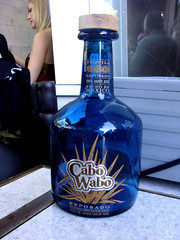 The waiting is always fun. There are people from Detroit, St. Louis, Chicago, Winnipeg and Sudbury to name a few. Lot of travelers! As we enter the patio area they are selling Cabo Wabo tequila. Sammy’s booze line!! The shots were $12 bucks each and you got a hat or a t-shirt with the shot if you wanted one.   The Mod Club is small inside only holding about 600. As we entered I headed for the left the Satriani side and ended basically 2 or 3 people from the stage front. Nice spot. To be honest Sammy wasn’t the draw for here more Satch then the entire package before Sammy. Even the Hagar solo stuff and his Van Halen work  probably, would not have got me here but the whole band combination did. 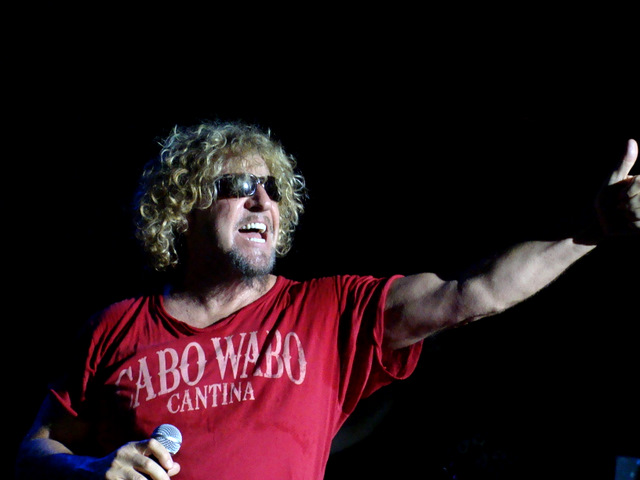 Believe me 3 tunes in I was a serious Hagar fan. What a great show!! It was fun, fun, fun!!  Man Chad Smith hitting the drums was deadly. He just pounded the hell right out the skins. Satriani doesn’t miss a single note. He is fast and serious. Joe didn’t cheat a note. I have seen a lot of players get the general sound out of the guitar by cheating the notes. Joe is really beautiful to watch. Especially when he is playing his own signature series Ibanez guitars!!  In fact everyone was playing great instruments – Micheal had at one point this perfect bass decaled with hot peppers and peppers as fret board markers, Sammy pulled out a Cabo Gibson and as I said Joe with his own line. Looked good! I caught a video of Down the Drain and a few other tid- bits. The song Sexy Little thing really sticks with we and the whole sound is just really great. 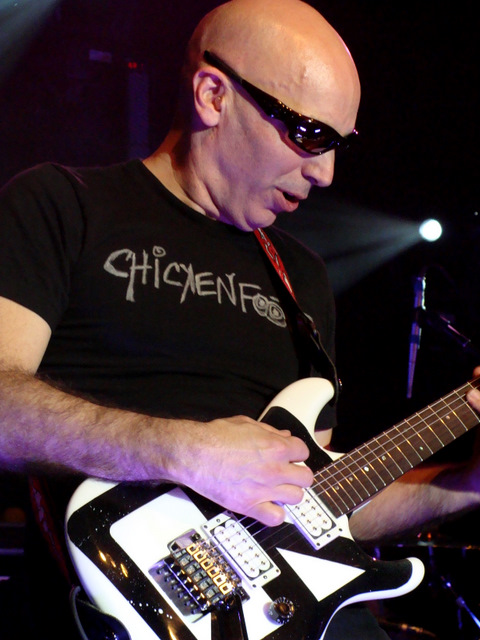 It has all the elements you would expect. A hint of VH mostly from the bass lines, some serious RHCP funk and stinging lead guitar smothered Sammy Hagar vocals.  How could it miss? The whole vibe was amazing.  Sammy is a pretty funny front man. He tells jokes a lot and gives insight into the sessions the album was born out of. Someone through a wrapped gift up onto stage ( I guess it was near his birthday) , Sammy picked it up and said “hey these guys get nervous when I receive gifts…I will share it with them…it looks like 2 and half pounds of dope!”

We got the whole 11 tunes from the new album (I found after there are 11 tunes because at show time the Chickenfoot website was not running this info and I did not end with a set list) and a little encore thing. I caught a drum stick and scored a Sammy Hagar guitar pick. I can’t write enough accolades to explain this show.

All I know is the show was a blast and the music was really heavy and excellent. What more can you ask for?  Check out some of the – you tube video’s and buy the album when it comes out in June. Trust me!! Maybe on the next round after the album hits the band will be back for the full arena tour. 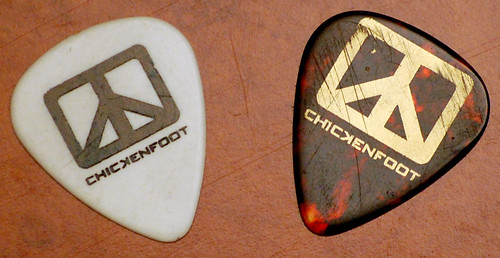