One of my concert rituals is that I never listen to the band I am seeing on the day of the show. Not sure when I started doing this… I just find it heightens the initial blast of live music on game day. As I approached the The Phoenix I passed some 20-somethings downing the whiskey and other liquors as if there was a drought coming or The Doors. (flashback). Once inside I jockeyed up front as the band took position on stage. 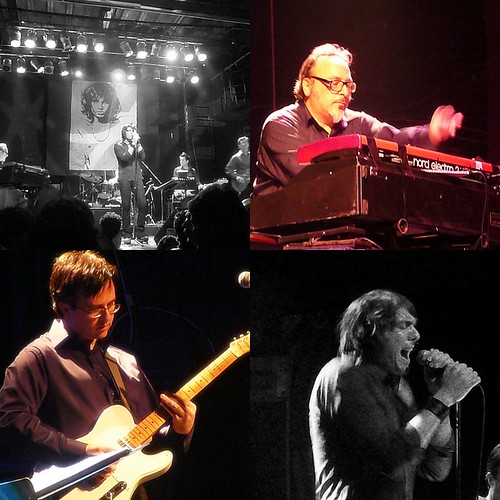 Goosebumps outa the gates at the Phoenix – Break On Through is hardcore… this band is hardcore… heavy bass line… Clifton David delivers the first verse and I was hooked in… I looked around and the crowd was hooked. This song, done this well, this loud was killer. I ran to the back near the soundboard to high-5 Craig or something I don’t know. Right into Soul Kitchen through Twentieth Century Fox the keyboard sounds of The Doors are almost soothing in a way… and it was in this pocket of songs where I noticed… just barely because they were so good…I’m talking about the accompanying vocals from Mike Daley. The tone, the distance from the mic, the sound mix…. it all hit. Go back and re-listen to a couple of songs off the album and see what I mean.

Time to move again. I stroll up the left side close to where James Gray is doing some crazy stuff on what seemed to be hundreds of keys. Here is what happened next from my view… with the Alabama Song and Light My Fire.

2 songs by Classic Albums Live during their presentation of The Doors, The Doors. Alabama Song and Light My Fire. A Solid set.Full Review at https://concertaholics.com

The drumming I could tell was getting wicked just by the look on peoples faces who seemed to be looking past the lead vocalist’s knees into Drum-town. I could not see from my view but was too busy sucking in the organ work along with some guitar as you’ll see in my double video below. Next during Backdoor Man… I am hearing the blues, I am hearing the 1960’s… I love this tune and don’t know why.

So I’ve wandered again into the center sound-zone down front… where the true fans were.. dancing, chanting, and digging their Doors. There were more woman than I expected and they were “into” this show in their own way…… the next few songs were just a big buzz…. it was loud here… feel the music… shake-the-jeans ….there were people with their eyes closed just like Clifton did at times as he presented Jim’s vocals so hauntingly well.

With these 2 minute songs feeling all blended together… the beginning of “The End” jolted my eyes forward… OO .. the sounds out of lead guitar were just as silly as the vocals… close your eyes kids were on the caravan here, in the desert, peyote and whatever… I wanted to film this whole song and but was paralyzed for the first half of this song…finally I came too….I had checked right out there for a few minutes. When your down front and in the clutch of the Phoenix sound system on 87…. it was everything and everyone – groov’in, smil’in…. “ride the snake”… “the west is the best”…. and “The blue bus is calling us…… driver, where you taken us” I’ll let Clifton take over here…

Ya. What did you think of that? Try not to watch that again. That’s what I’m talking about. That is how you get the audience-jaw-drop campaign going. How about Jim’s mural in the background peeking over Troy Feener‘s back? I cannot say much more about this song. It was delicious.

After experiencing The End… I wasn’t expecting any more “neck-hair” raising moments. WRONG! L.A. Woman made me want to slam dance, yell and party like I did in high school. Guitar, Drums, screams. Loved that one. Hell… do it again. Now the surprise of the night for me was “Riders On The Storm”. It was only the second time I’ve seen James Gray play keyboards for Classic Albums Live and this was the one. Down right lethal… I am telling you.. I went into the matrix-slow-mo-mode… running out of description here… it just felt like… please keep this song going.. its so perfect. Tickling cymbals, bass-line, sultry guitar and the whispering vocals. I saw the blue bus. 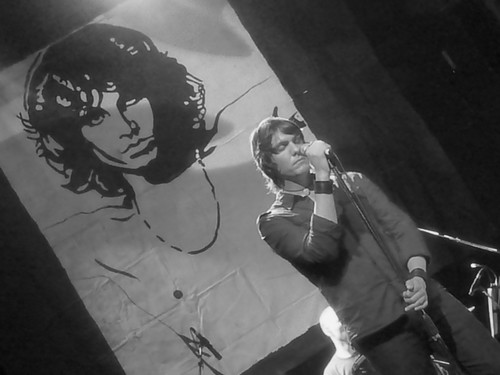 Toss in a great rendition of “Love Me Two Time”

I remember watching this video on Toronto Rocks after school in the early 80’s when I first got into the Doors and read “No On Here Gets Out Alive”. The guys came back out and pumped out “Love Her Madly” and the crowd loved it.

listen live to Love Her Madley

After one of these Classic Albums Live shows I am usually content. I get my fill of Zeppelin or Floyd and thats it. That is not the case this time out with this tribute to The Doors. I could have seen another 60 minutes last night and I could go see it again tonight..