I can’t say I remember a ton from this show. I do however recall how fast ASIA became a huge band 1982 / 1983. ASIA was being sold as a “supergroup” and they certainly sounded like one. Having the #1 debut 1st album that came out in early 1982 that had giant radio songs like Heat of the Moment and Only Time Will Tell. It was this momentum that easily pushed them into large arena shows within months of its release. By the time the second album Alpha with another huge tune called Don’t Cry, came out in mid 1983 ASIA was a touring machine. 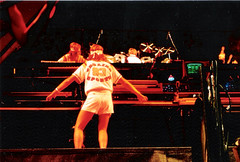 I wasn’t a huge ASIA fan. I enjoyed what I heard but I didn’t have the ASIA cassette welded into my car stereo. If the radio hits weren’t enough, the idea of seeing members of two of the greatest progressive rock bands that ever existed playing live certainly was. Former Yes and Emerson Lake and Palmer members were in reach.

We headed over to Buffalo, NY. As we always did before a show we would hit a bar called Washington Square or sometimes Sinatra’s for beers and wings. Many times we would time our arrival to miss the first band depending on who it was or how well we were feeling. We didn’t have tickets and we knew there would be lots on the street and at the box office to choose from. On our way from the bar to the “aud” as this venue is called we came across a guy walking in the other direction who asked if were looking for tickets. “Sure what do you have?” we asked? The guy says “front row for face value”!! We rounded them down a few bucks and took them!!! (come on he was walking away from the venue)

Stopping at a bar prior to a show also gave me time to prepare my camera to sneak in. I had an Olympus OM 10 with an 80-200 lense. I would tape the lense to one ankle and the camera body to the other with black electric tape. Film would just go into my pocket. In 1983 if you had a sizable camera people just assumed you were a photographer and gave you lots of room to move around. There were so few cameras inside a venue after the media rush in the first 2 or 3 songs. This paid off huge in the few years I did this. I ended getting massive artists looking into my camera even posing from time to time.

My seat is just left of center almost in front of Steve Howe. Nice! The stage was pretty straight forward I recall the lighting behind Carl Palmer was set up in a triangular fashion to kind of show an “A” and Palmers huge cymbal as part of the kit. The drum kit was impressive enough and to watch Carl play it was just nuts!! 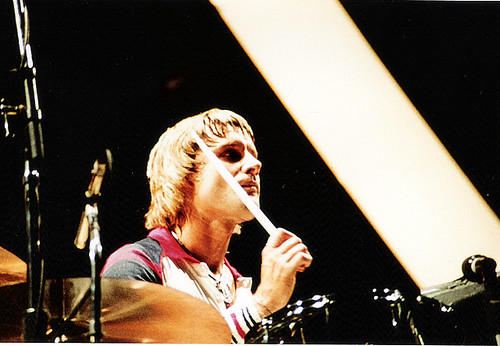 …I also recall how awesome Steve Howe was to watch. His guitar prowess is just amazing. (all that YES is in my head right now) At 1 point I remember him coming up to a small keyboard set up on his side and he looks down and mouths the word “fuck” big time for some reason. Funny the stuff you recall from past shows, beers or no beers. These days the no beers shows are the best ones for me. I wish I could go back and catch a bunch of the shows I did that I over did the festivities prior to the start them. THAT! Is another story.

You can’t argue with John Wetton‘s voice, he delivers the goods every time. They all throw vocals around pretty good but Wetton just does it best. All this coupled with Downes keyboards made the last minute decision to go to this show a really good one! I can’t say this was a great show but I can tell you a front row seat can make even an average show that much better. 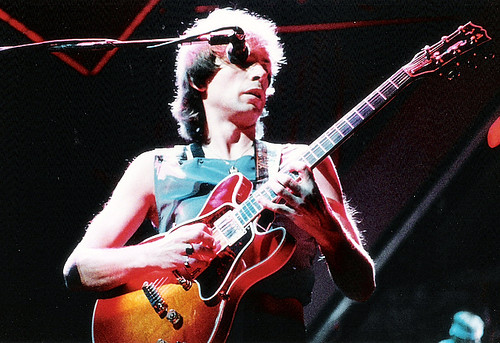 …I wish I could recall more show detail but I can’t. I did manage to get some awesome pictures, there just isn’t many around that compare from this era of ASIA. I also found a Japanese bootleg of this show on line from a 1982 Buffalo show.
Todd 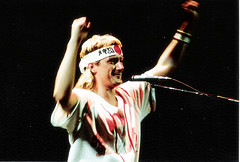 For the complete set of Asia Photos I shot go here and if you were at the show please leave us a comment.