Ticket Stub from the first show.

Just a little background before I share the experience.

In March 1977 the Rolling Stones (billed as the Cockroaches) played and recorded 2 performances in a small club called the El Mocombo in Toronto. These shows would be culled down and added as an entire side to the soon to be released double live album Love You Live. The band arrived in late Feb. to prepare for the gigs. When Keith arrived he passed through customs ahead of his luggage and went on to the Harbour Castle Hotel. Customs found residue on certain items in is luggage. The find leads to a raid of his hotel suite and the confiscation of a significant amount of heroin. Keith was charged with importing. When you listen to the El Mocombo side of Love You Live, Jagger intros the band and when he intros Keith’s he says, “of course Keith is completely straight”. Another note Jagger changes the lyric in Its Only Rock & Roll to ” I bet you think you’re the only woman in Toronto”.

Anyway 2 years later Keith had to prove to the Ontario court he was / is clean and among other terms was ordered to play 2 benefit shows for the CNIB (Canadian National Institute for the Blind). Why the CNIB is of rock lore. Keith’s Blind angel is another story. The court ordered the shows and once finalized they happened fast. This is where I come in.

In April 1979 I was 17. I heard on a Friday afternoon tickets would go on sale Monday and the shows would take place just days after. I bolted off to the closest BASS (best available seating service) ticket outlet I could find. That was Burlington, Ontario in a Dominion grocery store set inside a shopping mall. I got to the location about 7PM Friday and thankfully no one was there yet. I was going to wait the 2.5 days to get tickets. The mall was still open when I got there so I kind just wandered around a little and kept a close eye on the ticket outlet. As the mall closed down I moved to a place in between the entrance doors and kind of settled in. It didn’t long before I noticed cars slowly driving by checking out the BASS outlet. Around 10PM the security guards moved me outside. I remained alone I guess until maybe 11:30PM when these 3 guys from Syracuse came racing up like they had run all the way there. The party just got started because it didn’t take long before a lot more people showed up. Cars whizzed up and out would come 2 people here then 3 there. Plenty of people walked up with sleeping bags, lawn chairs, blankets, newspapers, coolers, stereos 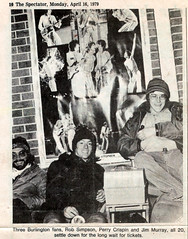 and a couple of posters went up. I would say by 3 or 4 AM there were @ 150 or so with lots of others hanging out not really in line just in it for the buzz I guess. It was nice being the first in line because everyone eventually makes it up to front to scout out the scene and say hello. Being number #1, as I soon began being called, I could wander around without having to worry that someone would try and grab my spot. It would be pretty tough to rip the number #1 spot. Saturday and Sunday were just a blur of beers, tons of laughs, lots of Stones music blasting, the odd cop rolling by every now & again, the occasional media checking things out. I remember this 1 guy playing Rolling Stones trivia with everyone running around asking crazy questions like ” what stones song mentions blindness”. By early Monday morning there were 1200 or 1300 hundred people in line, just to put the demand in context this was 1 location of many throughout the GTA. There were 2 shows and the Oshawa Civic Auditorium could hold about 1300. There was to a 2-ticket limit unless you received tickets through the CNIB. Plenty of tickets were to be held back for the CNIB. So the actual number released through BASS would be pretty low. There was to be an afternoon show and an evening show. As 9AM neared the police were helping security organize the crowd because they had to get us from the outside through the usual double door mall set up to the outlet kiosk about 50 yards into the actual mall. Anyway as you could imagine pressure mounted and pushing yelling ensued and a couple of the glass doors were broken. Eventually I was standing in front of the smiling clerk at the BASS computer surrounded by media, security, police and plenty of curious onlookers. As the clock hit 9AM the clerk repeatedly tapped the button until 2 beautiful tickets came out. I paid for them and walked away. I was immediately offered $1,000 by someone for the pair, I laughed and the media (which turned out to be the Hamilton Spectator) asked me some questions and I had my picture taken. 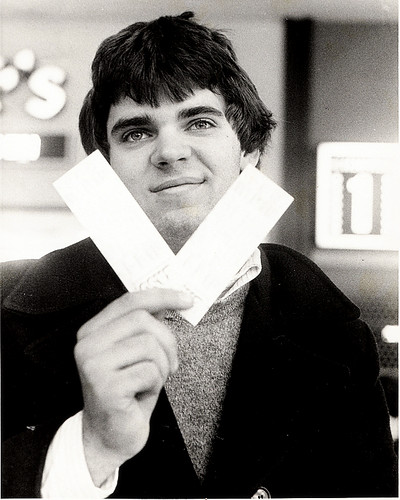 …I had looked at the tickets but not really seen them until the scramble died down a little and I could take a moment – Keith Richards CNIB April 22, 1979 row A seats 21 & 22. I was going to be front row for a Stones show in a small venue a matter days from now.

It was crazy outside the Civic Auditorium the day of the shows. The buzz was just incredible. The Rolling Stones were within earshot. I arrived early enough to catch the muffled sounds of the band blast through the first gig. The whole environment around the arena was just pulsating. When the afternoon gig was over and the crowd was leaving / milling it was hard tell, there was a sense of awe of like I can’t believe this really happened and is it’s going to hit us again like a giant tidal wave. There were plenty of people without tickets hanging around, there certainly wasn’t a shortage of cops and there was plenty of booze & Mexican weed all over the place. (remember those gigantic seeds)

We lined up early and went in as soon as we could. Something like 5:30PM for the 7PM show. I recall a drunk taking a tumble with a ticket in his hand right outside the door in full view of many cops and many without tickets. The cops moved in and so did the group without tickets hoping to snatch the ticket before the cops hustled Johnny Walker off to the drunk tank. To no avail the drunk went and amid many pleas from desperate onlookers so did his ticket.

I get inside show my ticket and get an escort right to my seat. The venue feel tiny and my seat is front row dead nuts centre. The first thing I notice is the stage is very low. So low that when I sit down I can easily rest my feet on it if I want to. Yep, the band is in the garage and I sitting on the hood.

I asked a security guy for his laminate. These were really nice a gold card with black print set against an embossed Stones tongue and lips logo. Of course he said no. You got to try. I did eventually get a Keith pick from the stage. (medium – from Manny’s guitar store NYC) 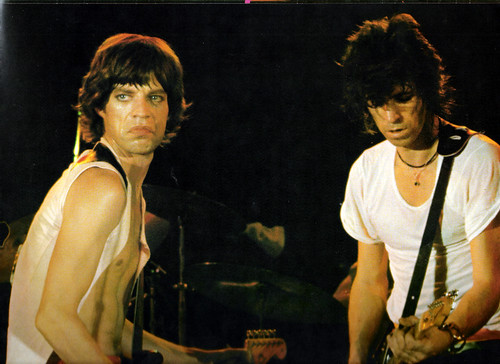 Here we go!! John Belushi comes out with blind DJ from London Ontario and makes some jokes about his lazy bastard partner from the Blues Brothers movie laying on some rock down in the Bahamas. Belushi goes to introduce Keith Richards and the place goes berserk. Keith tries to read a written statement but the crowd is just overwhelming and his just kind of tosses it away and say’s “I’m just happy to be here”. Ronnie Wood comes out as does the rest of the recently formed New Barbarians which included Bobby Keys, Stanley Clarke, Ian Mc Lagan and Ziggy Modeliste for what is only their second public performance the first being several hours prior. They rock through 7 or so songs, Sweet little Rock and Roller, Infecshun, F.U.C. her, Seven Days (classic tune) Breathe On Me, I Can Feel the Fire and the last and very very poignant Before They Make Me Run. Yes!! Everyone leaves the stage except for Keith and Ronnie. At this point the crowd is just about to start pulling hair out. From my vantage point I can already see Jagger jumping around back stage. Out comes an acoustic guitar and a stool for Keith. Now above all else what followed made this show a rock history event. Jagger flounces out on stage wearing pretty similar gear to what he wore during the 1978 Some Girls tour, tight red plastic pants and a light pink cotton sleeveless shirt all ripped down to nothing and taped with duct tape. The crowd does its thing, Ronnie fades to the far left and not before and not since have the Stones performed a duet. Keith and Mick do Prodigal Son from the Beggars Banquet album. Keith is sitting on stool strumming, 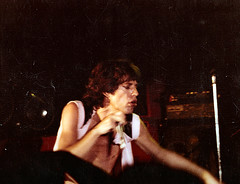 Mick leaning in to the mic like he does. I get goose bumps even as I write this. As the years go on so does the impact of this simple song performed as a duet by the glimmer twins. Just awesome!!!! (this wasn’t done during the afternoon gig) Charlie and Bill emerge and the Rolling Stones plow into Let it Rock. The set was basically 9 or 10 tunes they played on the Some Girls tour, such as Beast of Burden, Just My Imagination, Shattered, Miss You, Star Star. More of the barbarians come back out on stage and they all finished off with a howling Jumpin’ Jack Flash. The sense of being literally on stage was unbelievable. At times if I leaned forward enough Jagger would actually be directly to one side or the other like playing behind me, Wild!! I could of slung him over my shoulder and at times felt like I could of hit Keith or Ronnie’s strings if I wanted. 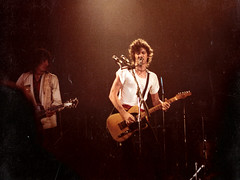 The show went by so quickly. It was like the show started and ended in 15 minutes. I managed a pick from the stage and was more than happy. To recall it note for note I couldn’t but the overall vibe that this was rock history in the making and the sense of rock & roll Kingdom being there in this moment was just amazing. We were all Kings for a day!! I didn’t take any pictures but I have found over the years a few here and there. I also found a bootleg recording of the show called Blind Date. The best picture I found being a Dimo Safari picture from the 1982 CHUM FM calendar and a couple from Neil Preston a very celebrated rock photographer. As well as few in a rock head shop in Niagara Falls.

The second ticket I gave to my then girlfriend. To this day I regret not giving it to my older brother Tim. We did lots of shows after but I wish he had been there with me for this one. I laminated the ticket stub and pick together unfortunately years (1987) later a friend of my younger brother took my entire collection of ticket stubs from my trunk I archived stuff in. I lost more than a few picks.

Hope you got a buzz or at least a little sense of what it was like to have been there.

Posted in: The Rolling Stones
Next