…..I have to admit… I went to this show with only the expectation of having a good time and bathing in the sheer iconic stature of Iggy & The Stooges. I don’t need to go into details about the impact of Iggy and The Stooges had on music or their history. I understand that if you are reading this review you already know. My worst fear would be an encounter with a parody of their former selves. I had not seen Iggy before and was relying on what I had heard from my friend Bob, what I heard, what read over the years and I what I could glean from the internet. I’m very happy to say my fear wasn’t realized and it wasn’t by a long shot.

This show blew me away!!! If this band is operating at 60% of what they used to be able to do, there aren’t many frontmen around now that could touch this level of energy. Sometimes the show is about the headspace you happen be in at the time. I was certainly ready for the stripped down c0ck out, rock out show. Everything was perfect!!

My friend Bob and I went down to the show and got there a few minutes before Iggy went in. I got a nice video clip of him getting out the black towne car, signing a few things, talking to a couple of fans then heading in the stage door. The clip is cool just for the sense of getting a bit of the fan frenzy around a rock star. There is a point in the clip when someone asked Iggy to pose for a photo and he obliges with a goofy headshake and sticking out his tongue. Someone said they were sorry about the equipment getting ripped off in Montreal the day prior and Iggy says ” I’m not gonna let that bother me…” At another point in this video you can hear my friend Bob yell “alright Jimmy”!

Iggy outside Massey Hall in Toronto | Autograpghs | 2008 from concertaholics on Vimeo.

We hang around outside and miss the first band completely, which was our intention. We head in around 8:50PM or so. Our seats are OK, Massey Hall has very few poor seats. We are a little right and back around row P. This seating location will change. The stage set up is basic 1970’s rock show stuff. 2 rows of stacked speakers on the right and left, Marshall speakers and amps (these looked brand new – likely because of the 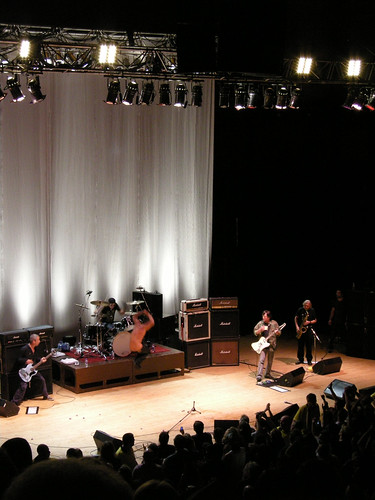 recent theft in Montreal) stacked on both sides of the drumkit which is on a low riser, a couple racks of rock lights and a plain white curtain for a backdrop. That is it!! That is as basic as it gets!!

I guess @ 9:05PM Iggy & The Stooges take the stage. Iggy barechested is wearing black boots and jeans. Surprise! When I saw him outside I thought he looked pretty good for guy over 60 but once I saw him rock I was thinking there likely isn’t anyone out there from that late 60’s early 70’s era that could keep up.

The setlist consisted of 19 songs (20 if you include LA Blues jam with Fun House) most of which are pre 1972. The Weirdness (Trollin’, I’m Fried, My Idea of Fun, End of Christianity) and Skull Ring (Little Electric Chair) albums got some representation later in the show. It was lots Stooges baby!! They basically played the entire Fun House record. They started out with Loose, Down on The Street, 1969 (big highlight), I Wanna Be Your Dog.[video]. By the time they were into Dog the place was just in a frenzy. Iggy had already climbed the speaker / amp stack twice by this time. The performance has zero pretense, no choreography. It is all nuts out rock. Just say it, do it, feel it and as Iggy says himself “show yourself”!!

It is liberating to watch a performer just let go completely. He is a master at drawing you in making you part of the show. Maybe the art of it all is the appearance of no structure and just pure rock. At any rate it works for me.

TV Eye was one of the highlights for me. Just as they were getting into No Fun / LA Blues jam someone tackles Iggy from the side of the stage knocks him down pretty good and he gets somewhat pissed and says “fvck” a few times and starts yelling at people to come up on stage, pointing, yelling “show yourself” “come on”… to security “let them up” I guess by the conclusion there were maybe 80 to 100 people up there. At one point there were a couple of guys that jumped from the balcony to the speaker stack to the stage. If you have been to Massey Hall it is hard to believe that could even happen there. 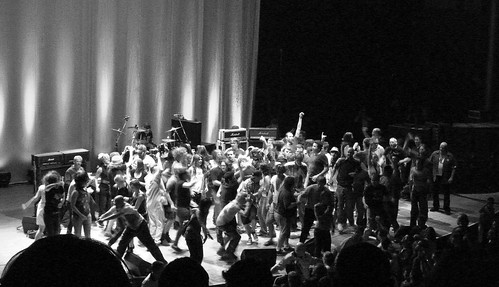 Classic!! I know he often does this (I guess that is as closed to planned as the band gets aside from a setlist) but its still a blast to watch. I got some good video of this.

We change our vantage point to the centre in time to catch Iggy come out and halfway up the aisle for some Search & Destroy (the only Raw Power track played). We get to move with him and down the aisle we go toward the stage. We ended up at the stage front and rocked there for the last 6 or so songs. What a blast it was!!! At one point I was watching Mike Watt grind, I mean literally hump his bass against his amp and speakers. Beautiful stuff!! I caught a really short but very up close video of the last bit of Little Doll.

I have this great image in my head of Iggy “slithering” off the stage on his belly into the front area. The last thing I saw was soles of his boots gliding over the lip of the stage and he disappeared into the mass of the crowd. I loved it!

Here is another image for ya! I’m leaning on the stage by this point and Iggy comes over a leans against the stack of speakers in front of where I am, he crosses his legs as he leans into the speakers, stares down at a few women beside me, holds the mike down like he is holding his tool and wags it around a few times while giving this crazy smirk to these chicks!! It was hilarious!! Fun!!!

They finished with I’m Fried and that was it. I am pretty sure they didn’t go off and come back just blew through the setlist. No encore just bang!! House lights up. 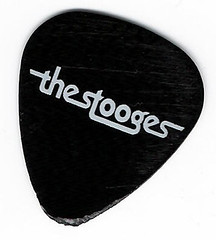 I really wished I been able to see them in the early 1970’s man what a ride that would of been!! This one was still pretty cool though!!

I scored a setlist and a Stooges guitar pick.(and it was used for sure) A couple more items for the rock & roll memorabilia vault. (sorry to the little guy who asked on the way out my for a portion of the setlist and the pick – I just couldn’t give that stuff away)

Thanks for Both Photos by Peter Beens – Peter on Flickr

Posted in: Iggy & The Stooges
Prev