In June 1995 a friend and I had tickets to see Eric Clapton on the Behind the Sun Tour play the Kingswood Music Theatre in Maple Ontario just north of Toronto. At that time Kingswood was part of the Wonderland Amusement Park. 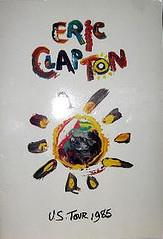 It was a perfect summer weather day, warm and sunny with zero humidity. We arrived pretty early in the day to check out some of the rides etc. and at some point in the afternoon, I’m pretty sure we were on the mind-buster roller coaster we heard some music coming from the theatre. The theatre is basically an outdoor venue with a partially covered seating section and a grassy hillside area. After listening for a few minutes there was no mistake “slowhand” was playing his guitar doing a sound check. We ran to a wooden fence surrounding part of the venue and continued to listen. I couldn’t take it anymore I had to see this sound check. I said to Mark the guy with me “I’m climbing over” he sort of stared at me blankly and over the fence I went. I hit the ground and orientated myself to where I was in relation to the music. I was mid venue and to the left side of the stage if you were standing and facing it. I walked out into an aisle in the seating area. There was Eric Clapton and his band jamming away on a blues tune I didn’t recognize. What seemed like only seconds later Mark appeared right behind me. I knew a true music lover like him couldn’t resist an attempt to see even a few minutes of Eric Clapton’s sound check. We stood for a brief moment and without exchanging a word began to walk across the back of the seats and down the center aisle toward the stage. There wasn’t a person other than the band to be seen anywhere and down the aisle we continued. We weren’t really running but we weren’t walking slow either. The distance to the stage from where we started was a nice little jaunt and somewhere in that distance the band had switched from the blues number to, get this. Let it Rain. Friggin’ awesome!! No vocals just music and like I was walking in trance I walked to the very rail in front of the stage directly in front of Eric. I couldn’t help myself I air-guitar-ed some of the lead and watched in awe. EC was looking down and laughing and turning and smiling at the band. 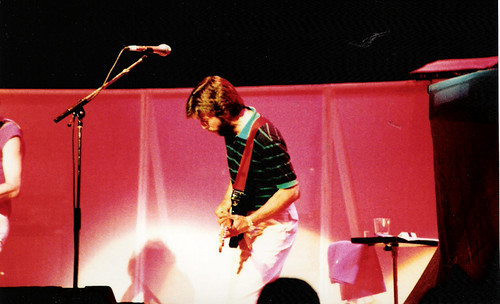 ……I can recall Duck Dunn laughing away pretty hard. Probably at me as apposed to with me but who cares, man how many times is this going to happen to you? The song is a good length EC played the heavy lead all the way through but it passed by so quickly, just amazing. At the end of it, I still can’t believe it, Let it Rain, I yelled up to Eric and asked him “how he was doing”. Eric says, “Great man…I can’t talk to you right now I’m workin'” I loved it. At this point someone came from behind the stage area and said we couldn’t be there and we had to leave. They said it very nicely and weren’t angry at all. I said thanks to Eric…he said “thanks …and bye” while waving to us as we waved to them as we were leaving. Just as we get back to the top of the aisle Bang!! The band blasts into …Further on up The Road. We walked backward in awe and retraced our steps right to the fence…and I’m not even sure if I walked out an exit or climbed the fence I was that blown away. We hung around as close to the fence on the outside as we could until they were finished. We kind of ran around the other side and watched the 3 or so town cars leaving to head back to Toronto until I guess near show time. 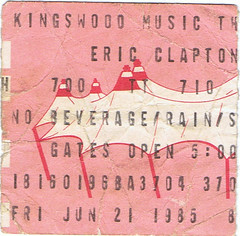 The second part of this whole awesome experience is we did have OK seats for the show but walked up to a couple of empty 3rd row seats prior to the start of the show fully expecting at some point for someone to come along and ask us to move. It never happened we stayed in the 3rd row the entire awesome show. I should dig out some pictures I took of the show. A bearded EC wearing a 2 toned green striped polo shirt with white pants tearing away on Blackie. So cool…. so nice…. What a music memory!!!